The Origin of Toasting Drinks

May 20, 2013 Tegan Jones
Steph B. asks: Why do we make toasts with drinks and why is it called that? 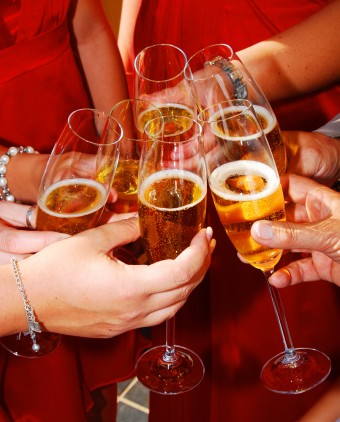 Humans throughout history have made a habit of basing a great deal of our traditions and customs around food. The curious practice of raising our drink containers is one of the most ancient of these.

To answer your question, for starters, we’ll dispel a myth.  You may have heard that the tradition of toasting originated out of a fear of poisoning- the idea being that clinking two glasses together would cause the liquid from both to spill into one another; thus, the people you’re drinking with wouldn’t poison you as they’d then be poisoning themselves. As interesting as this historical rumour is, not surprisingly, there is not a single shred of evidence backing up this conjecture.

As to the real origin, because the practice of honouring through a drink offering seems to have begun in pre-history, it’s hard to say who first got the idea. In fact, most ancient societies show evidence of doing this. The Ancient Greeks would offer libations to the Gods as a ritualistic practice, as well as make a point of drinking to each other’s health. Evidence of this can be found in The Odyssey  when Ulysses drinks to the health of Achilles. The Romans placed such an importance on drinking to health that at one point in time the Senate passed a decree that stated that all must drink to Emperor Augustus at every meal. The Decline and Fall of the Roman Empire even describes a feast where Attila the Hun indulges in at least three toasts for every course.

The term “toast” itself originated in the 16th century. One of the first written accounts of it was in Shakespeare’s The Merry Wives of Windsor when the character of Falstaff demands – “Go fetch me a quart of sack; put a toast in’t.” To translate, he’s asking for a great deal of wine with a piece of (literal) toast in it.  I can hear your disgusted outrage and objections to adding toast to wine, but it was actually quite a common practice at the time. This is thought to be due to the quality of wine in the past- it was in many cases inferior to our modern vintages.  Thus, placing a piece of toast within a jug was supposed to soak up some of the acidity and improve the flavour.  This also had the side benefit of giving people something to do with a piece of stale bread, often spiced or with fruit embedded, that would improve the bread’s palatability.  Up until very recently in history, wasting food just wasn’t something people tended to do, so finding ways to make stale bread taste good was fairly common- waste not, want not. (This was also more or less how French Toast got its start.)

Over the coming centuries, the term “toasting”, in English, slowly transformed to incorporate traditional libations and the honouring of people. In the early days of this connection, the person being honoured often received the physical toast saturated with wine at the end.

Toasting became so popular in the 17th and 18th centuries that Toastmasters came into being. Acting as a kind of party referee, they were there to ensure that the toasting didn’t become too excessive and that everyone got their fair share of toasting opportunities. This may sound silly, but it was a desperately needed role. If left to their own devices, guests would occasionally go on toasting every individual in the room. (This being a great excuse to drink excessive amounts of alcohol without seeming like a lush.)

Elaborate drinking games soon became interwoven with the toasting ritual, and most of them seem to have been designed to impress the ladies. One of the more “charming” examples of this involves a gentleman cutting himself, mixing the blood with his drink and then toasting to his lady of choice in order to prove his devotion. Shakespeare is once again our authority when it comes to this particular early, bizarre toasting practice. In The Merchant of Venice the King of Morocco talks of stabbing himself and then laments –

Another odd custom of the time involved toasting to a lady’s beauty by drinking from her shoe… Seriously, if anyone ruined my shoes in such a way, they’d be getting stabbed with my heel. Also, ewww.

Unsurprisingly, the sheer excess of these practices, and drunkenness that often ensued, lead to anti-toasting clubs and movements. Although they were unsuccessful, the eventual result was toasting becoming more of a civilized, restrained and intellectual pursuit, rather than one purely designed for imbibing alcohol. There were even “Toastmaster” books published around this time. One of these was The Toastmasters Guide by T Hughes, which strove to instill proper toasting etiquette within the reader. Some of these books include examples of short, appropriate, but also witty toasts that were relevant to all occasions. Examples of these include –

May the works of our nights never fear the day-light.

Prudence and temperance with claret and champagne.

Love without fear, and life without care.

May we never want a friend to cheer us, or a bottle to cheer him.

A generous heart and a miser’s fortune

Evidence of this change in etiquette is still apparent today, and there are even still Toastmaster Clubs. Furthermore, while we still often include alcohol in our toasting, drinking directly after a toast is usually far more restrained, often just a sip, and more reminiscent of its roots – a practice used to honour someone in a respectful and revered manner, rather than a great excuse to get drunk.

As for the aforementioned raising of the drinking vessels and clinking them together, there are a couple of theories surrounding the origin of this, but as with the ultimate origin of toasting, we can only guess. Probably the most popular, and simplest, theory is that people originally did this to raise their drink to the gods or person being honoured in offering, before taking a drink themselves.  As to the clinking, this perhaps has similar origins of symbolically offering your drink to the people around you in a general toast.