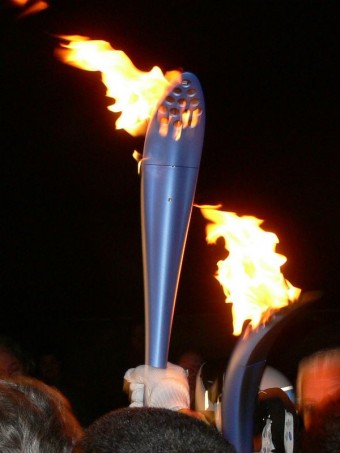 The Olympic Flame tradition has its origins in the Ancient Greek Olympics where a fire was kept burning at an altar dedicated to Hera in a sanctuary in Olympia.  Other fires were also lit in Zeus’ and Hera’s temples to honor them during the Olympic Games.  The practice was brought back during the 1928 Amsterdam Summer Olympics and today the Olympic flame is first lit at the same location where Hera’s temple used to be before it is transported by various means to the city that is hosting the Games. During the 1928 Amsterdam Olympics, though, there was no torch relay and the fire was simply lit on Marathon Tower at the Olympic Stadium in Amsterdam.

The slightly more recent tradition of the running of the Olympic torch to bring the flame to the host city from Greece is not based on any Ancient Greek tradition, contrary to popular belief and Nazi propaganda at the time of the inception of the tradition.  Rather, this tradition was brought about during the 1936 Berlin Games.

When Hitler came to power in 1933, he was against hosting the Olympic Games.  Promoting internationalism and multicultural celebration wasn’t exactly his cup of tea.  He also felt the Games were “an invention of Jews and Freemasons” and some thought he’d cancel them being hosted in Berlin (and of course there was much controversy surrounding even holding them there in the first place, given the Nazi party’s viewpoints didn’t exactly hold with Olympic ideals).

However, Hitler was convinced by Joseph Goebbels, the Propaganda Minister (yes, they had one), that the Games would actually give the Nazis a great platform to demonstrate Germany’s “superiority” as well as that of their athletes, not just to the world, but to Germany’s own people.  As Goebbels said in an interview in 1933, “German sport has only one task: to strengthen the character of the German people, imbuing it with the fighting spirit and steadfast camaraderie necessary in the struggle for its existence.”  Six months after taking power, Hitler announced in a meeting that he had decided to allow the Games to be hosted in Berlin.

The torch relay was one vehicle of the propaganda machine.  The idea was thought up by Carl Diem.  Diem was the Secretary General of the Organization Committee of the Berlin Olympic Games, as well as the chief organizer of the 1936 Summer Olympic Games and longtime Berlin sports administrator.

Diem was inspired by the torch-like cauldron on Marathon Tower which held the flame at the 1928 games.  It isn’t exactly known if he originally came up with the idea to fit with the Nazi propaganda that would be developed around it.  Diem wasn’t exactly a lock-step Nazi, even married to a woman from a Jewish family, which for a time got him labeled a “White Jew”.  He also lobbied heavily to allow Jews to freely participate in the 1936 Olympics, though it is possible this was just because there was talk of a widespread boycott of the Games if they were not allowed to do so.  Diem was later integral in convincing certain key people that German Jewish athletes were and would be treated fairly, which helped put a stop to the potential boycott.  They, of course, were not being treated fairly, which Diem well knew.

Whatever the case, Hitler and Goebbels loved the idea of a torch relay from Greece, precisely because it would fit so well into the Nazi mystique they hoped to project during the Olympics. They felt it was fitting to show a connection between Ancient Greece and the modern German Reich, with Hitler’s belief being that the Ancient Greeks were Aryan forerunners to the modern German Aryan populace.  Further, it would help demonstrate the progression from the great Ancient Greek Empire, to the Romans, to the new empire forming in Germany.  For this reason, the propaganda machine put forth that the torch relay was an Ancient Greek tradition during the Games.

They went further than just doing a relay, though.  Hans von Tschammer und Osten, head of the Reich sports office, convinced Hitler to pay for an excavation of the Ancient Olympic game site in Olympia for the lighting ceremony.  As mentioned in an article a few days ago, after the ceremony and torch relay there, they left a stone with the Olympic Rings symbol carved in it, which, in the 1950s fooled Lynn and Gray Poole into thinking the symbol had Ancient origins.  They subsequently put this in their book, History of the Ancient Olympic Games, which started the myth that the symbol had Ancient Greek origins. You can read more about here: Origin of the Olympic Rings

In any event, after all the preparations were made, including all the torches made by Krupp, a munitions and steel conglomerate that helped arm Germany for the coming war (and during WWI), the Olympic Flame was lit by 15 robed “virgins” under the supervision of a “high priestess” at the recently excavated runes.  The flame was lit via a concave mirror reflecting the rays of the Sun, with the Nazi anthem, Die Fahne Hoch, playing in the background. This is pretty much how it is done today, excepting of course without the Nazi anthem.

Next, some 3,331 runners carried the flame on various torches about 3,187 km (1980 miles). The trip took 12 full days and 11 nights to get from Olympia, Greece to Berlin, crossing Greece, Bulgaria, Yugoslavia, Hungary, Austria, Czechoslovakia, and, of course, into Germany.  As you might expect, there were several protests staged along the way, particularly in Yugoslavia and Czechoslovakia, but security forces were called in to suppress them and let the torch relay continue unhindered.