The First African American Invited to Dinner at the White House 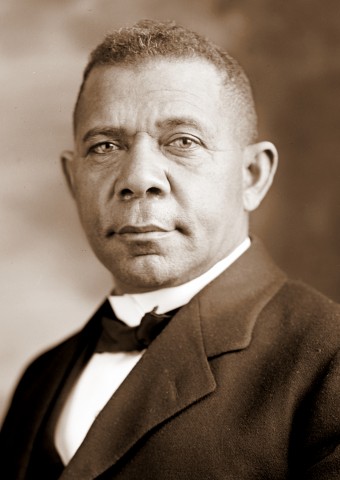 In the autumn of 1901, Booker T. Washington, the great educator, author, and orator, was on a speaking tour.  In Mississippi, he received a telegram from President Theodore Roosevelt.  (President William McKinley had been assassinated less than two months before, an event which led to Roosevelt being sworn in as President.)

The telegram asked Washington to come to the capitol for a conference.

When Washington arrived on the afternoon of October 16, 1901, he received an invitation to dine with the President at 8:00p that evening.  According to Roosevelt biographer, Edmund Morris (author of The Rise of Theodore Roosevelt), the dinner proceeded “behind closed doors, under the disapproving gaze of a negro butler”.

Besides Roosevelt and Washington, the President’s wife, daughter, and three sons were present at the historic meal.  While this seems a trifling thing to us today, at the time inviting a black man to dinner at the White House was anything but.  News of the unique dinner traveled along the Associated Press wires throughout the night.  The morning newspapers were generally positive in the North, but many Southern papers took a different tact. They proceeded to attack both Roosevelt and Washington with fervor.

For instance, the next afternoon, the Memphis-Scimitar reported:

The most damnable outrage which has ever been perpetrated by a citizen of the United States was committed by the President, when he invited a n****r to dine with him at the White House… It would not be worth more than a passing notice if Theodore Roosevelt had sat down to dinner on his own time with a Pullman car porter, but Roosevelt the individual and Roosevelt the President are not to be viewed in the same light.

The newspaper went on to criticize Roosevelt’s claims that his mother was a Southern woman and to assert that Southern women could no longer accept invitations to the White House “with proper self-respect” nor should President Roosevelt now be welcome in Southern homes.   While Theodore Roosevelt’s father was a big supporter of Abraham Lincoln and the Union during the Civil War, his mother was, in fact, from the South and from a slave owning family.  Her brother, James Dunwoody Bulloch, was also a Confederate Navy commander.  Another brother of hers was a member of the Confederacy, serving as a midshipman on the CSS Alabama.  After the war, those two moved to England.

Letters poured into the White House full of anger and menace.  A U.S. Senator from South Carolina proposed a retaliatory measure: “The action of President Roosevelt in entertaining that n****r will necessitate our killing a thousand n****rs in the South before they will reach their place again.”

Men swore never to vote for Roosevelt in future elections.

Soon after the dinner, Roosevelt received an honorary doctorate from Yale University, along with famed novelist Mark Twain.  Booker T. Washington was also present at this event.  Roosevelt spoke to Twain and asked the novelist for his opinion on the controversial matter.  Twain replied “that a President was perhaps not as free as an ordinary citizen to entertain whoever he likes.”

Reports had been circulating that Roosevelt and Washington would be dining together again.  Security was tightened for the President at Yale because of the ordeal and the President was not allowed to “work the crowds”. In addition, at the event, no public mention of the White House dinner was made.  Booker T. Washington was also pointedly seated far away from the President.

A few days later, Roosevelt made a public statement about the “infamous” dinner.  True to his no-nonsense style, he simply said, “I shall have him to dine as often as I please.”

Soon after, a group of black admirers presented the President with a possum as a gift for his 43rd birthday on October 27th.  Roosevelt vowed to eat it, “well browned and with sweet potatoes on the side”.

Booker T. Washington was to visit the White House again, but only in the morning during regular business hours.  Future dinner invitations became impossible for both men.

For the remainder of his term as U.S. President (1901-1908), Theodore Roosevelt was never again to invite a black person to dinner at the White House.  However, Roosevelt later stated on the issue of race something that would later be echoed, albeit in his own words, by Martin Luther King Jr. in his “I Have a Dream” speech.  Roosevelt stated:

…the only wise and honorable and Christian thing to do is to treat each black man and each white man strictly on his merits as a man, giving him no more and no less than he shows himself worthy to have.