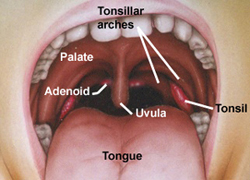 Today I Found Out what those foul smelling, small, white-ish, chunks that you can sometimes feel at the back of your throat when you swallow are. They’re called Tonsilloliths or Tonsil Stones.

Although most people experience these little white balls  at the back of the throat that often get coughed up into the mouth, this widespread affliction is rarely talked about and the awareness about it very low.  Many suffer in silence believing that they’re alone or the occurrence is nothing more than dregs of last night’s dinner.  Another reason people don’t dispense with their problem of tonsil stones is because they are embarrassingly nasty and foul smelling!

Tonsilloliths, also known as tonsil stones are stinky little globs of mucus, dead cells, debris and bacteria that form in the tonsil crypts which are simply small pockets or divots that appear in everyone’s tonsils. When the trapped dead cells, mucus, and debris harden or calcify, they form white/yellow ball in the tonsil pockets. They usually appear as tiny little chunks in the shape of cauliflower and smell like they could wake up your dead grandma.

The strong unpleasant odor is caused by a build-up of sulfur-producing bacteria that feeds on the tonsil stones collected in the crypts of the tonsils and is a combination of hydrogen sulfide, methyl mercaptan, and other stinky substances that form in it. Tonsil stones can range from a size of a small peppercorn to a rather large size causing discomfort in the throat and in some cases uncomfortable side effects, including sore throat and ear pain and tonsillitis. It is also believed to be one of the reasons for Halitosis (bad breath). 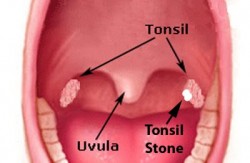 Tonsil stones are fairly common in adults and children. However, they tend to occur most often in people who suffer from chronic inflammation in their tonsils or repeated bouts of tonsillitis. Studies have shown that people who have had their tonsils removed, under most circumstances, almost never experience tonsil stones.

There are some effective treatments for reducing the occurrence of tonsil stones. Removing one’s tonsils is an option, but not the best solution as tonsils play a role in the immune system and are meant to function like nets, trapping incoming bacteria and virus particles that are passing through your throat. Easy home treatments like gargling salt water, or non-alcohol mouthwash is often advised for getting rid of tonsiloliths. A water pick that emits powerful pulses of water is also a useful tool for clearing the tonsil crypts. The simplest solution is to use a cotton swab or toothbrush so you can push the nasty little things out and rinse your mouth free of them.