October 17, 2012 Daven Hiskey
Amit Bhatnagar asks: Where did the American tradition of trick or treating come from? 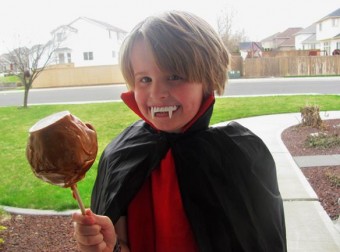 The practice of wearing costumes or masks during this sort of end of Autumn celebration comes from a Celtic end of year (they celebrated their New Year on November 1) Samuin tradition.  During Samuin, young men impersonating evil spirits by dressing up in white costumes with blackened faces or masks.  It was believed that during the transition from one year to the next, the realms of the living and the dead would overlap allowing the dead to roam the Earth again.  Thus, by dressing up as spirits, they were trying to fool actual spirits into thinking they were as well, which is particularly helpful when encountering evil spirits.

Beginning in the 8th century, the Catholic Church was trying to provide an activity that would hopefully stamp out the old Samuin traditions.  They came up with “All Hallows Even (evening)”, “All Soul’s Day”, and “All Saints’ Day”.  Many of the traditions of Samuin were then adapted into these festivities and by the 11th century, the Church had adapted the Celtic costume tradition to dressing up as saints, angels, or demons during this celebration.

As for the trick or treating, or “guising” (from “disguising”), traditions, beginning in the Middle-Ages, children and sometimes poor adults would dress up in the aforementioned costumes and go around door to door during Hallowmas begging for food or money in exchange for songs and prayers, often said on behalf of the dead.  This was called “souling” and the children were called “soulers”.

An example of a relatively recent (19th century) souling song is as follows:

A soul! a soul! a soul-cake!
Please good Missis, a soul-cake!
An apple, a pear, a plum, or a cherry,
Any good thing to make us all merry.
One for Peter, two for Paul
Three for Him who made us all.

As you might have guessed from the song, a common food given while souling was a Soul Cake (also sometimes known as a Harcake).  Soul cakes were small round cakes, often with a cross marked on top, that represented a soul being freed from Purgatory when the cake was eaten.  Soul cakes were generally sweet cakes, including such ingredients as nutmeg, ginger, cinnamon, and raisins.

Souling ultimately gave rise to guising in the U.K. starting in the 19th century, with children dressing up and begging for things like fruit and money.  In order to earn this token, they’d often tell jokes, sing songs, play an instrument, recite a poem, or perform in some other way for the amusement, not unlike the old tradition of souling but instead of prayers, a performance was offered.

The practice of guising made its way to North America, probably brought over by the Scottish and Irish in the late 19th or early 20th century (first documented reference in 1911).

Trick or treating instead of guising on Halloween popped up in North America in the 1920s and 1930s, first in the western half of the continent. The term and the practice slowly spread, with a brief respite during WWII.  After the WWII sugar rations were lifted, Halloween’s popularity saw a huge spike and within five years trick or treating was a near ubiquitous practice throughout North America.

Once guising morphed into trick or treating, children no longer performed for treats, but instead vandalized and extorted for their confectioneries.  The earliest known reference to “trick or treat”, printed in the November 4, 1927 edition of the Blackie, Alberta Canada Herald, talks of this,

Hallowe’en provided an opportunity for real strenuous fun. No real damage was done except to the temper of some who had to hunt for wagon wheels, gates, wagons, barrels, etc., much of which decorated the front street. The youthful tormentors were at back door and front demanding edible plunder by the word “trick or treat” to which the inmates gladly responded and sent the robbers away rejoicing.

Trick or treating has since spread to parts of the U.K., beginning around the 1980s.  Although, this adapted form of guising has met with a lot of resistance in the last few decades since hopping the pond, often seen by the older generations as “yet another unwanted consumerist culture import from the United States.”  In fact, even as recently as 2006, according to Norwhich Union Insurance, nearly 58% of homeowners in Britain turn off their house lights and pretend no one is at home on Halloween.  One British man went so far as to say about trick or treaters,  “I’ve thought about removing the cover from my doorbell so they electrocute themselves.”