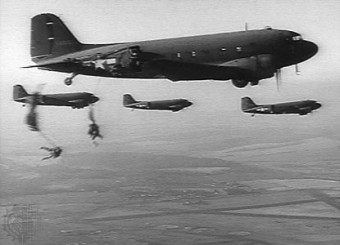 Today I found out where the tradition of yelling “Geronimo” when jumping out of a plane came from.

In the 1940s, the U.S. Army was testing out the feasibility of having platoons of soldiers parachute from air planes.  One of the first units to attempt to group jump out of a plane was located in Fort Benning, Georgia.  On the night before the group was set to make their first jump, they all got together and went out for a night on the town, including going to see a movie and generally getting as drunk as possible afterward at a bar.  The movie they saw is reported to have been the 1939 film, Geronimo, though that isn’t known for sure.  What is known though was that it was a film featuring a character representing the Apache, Geronimo; so it’s assumed it was that film as the dates more or less line up.

In any event, while out carousing after the movie,  a certain Private by the name of Aubrey Eberhardt was acting tough about the jump that was to happen the next day, making out that it wasn’t a big deal and he wasn’t nervous about it.  His fellow soldiers called B.S. on him and one of them reportedly exclaimed “You’ll be so scared, you won’t remember your own name!”  To which he replied, according to Major Gerard M. Devlin, “All right, dammit! I tell you jokers what I’m gonna do! To prove to you that I’m not scared out of my wits when I jump, I’m gonna yell “Geronimo” loud as hell when I go out that door tomorrow!”

This is possibly in reference to the story that the Native American Geronimo was given that name by Mexican soldiers after incidents where  Geronimo, showing complete disregard for his own personal safety, attacked armed Mexican soldiers with nothing but a knife, surviving each of those attacks despite being constantly shot at.  The name stems from the soldiers yelling and pleading to Saint Jerome for help as they faced Geronimo.

The next day, right after Eberhardt jumped out the plane door, he kept his promise and yelled at the top of his lungs “Geronimo!” and added some Native American mimicking war whoops, just for good measure.  This tradition of making a ridiculous exclamation as loud as possible in the face of death right after jumping out of a plane (these early paratroopers didn’t exactly end up having the best survival rates) caught on with the rest of Eberhardt’s unit and they all began exclaiming “Geronimo” when they jumped.

This became so popular that when the Army christened the 501st Parachute Infantry Battalion in 1941, which was the first combat ready parachute unit, they put “Geronimo” on their insignia and most of the troops would yell it as they jumped from the planes.  This practice eventually caught on with the general public thanks to extensive news media coverage of these parachuting troops, jumping out of a plane obviously being something of a novelty at the time.