Marilyn Monroe was Not Even Close to a Size 12-16 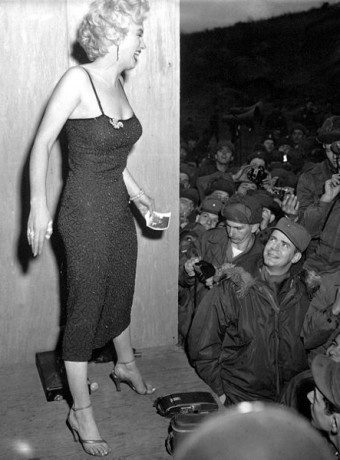 From Roseanne Barr stating, “I’m more sexy than Pamela Lee or whoever else they’ve got out there these days. Marilyn Monroe was a size 16. That says it all”, to Elizabeth Hurley stating,  “I’ve always thought Marilyn Monroe looked fabulous, but I’d kill myself if I was that fat…I went to see her clothes in the exhibition, and I wanted to take a tape measure and measure what her hips were. She was very big”, you’ll often hear people saying Marilyn Monroe was around the same size as the average American woman today (12-16).  In fact, nothing could be further from the truth, at least by today’s sizing systems.

How this myth got started isn’t exactly known.  One possible contributing factor to this myth was Marilyn Monroe’s atypical extreme hour glass shape.  More directly, it probably partially stems from the fact that women’s sizes today are not at all equivalent to women’s sizes in the 1950s. In the 1980s, in order to accommodate people’s vanity and ever expanding girth, the U.S. Department of Commerce got rid of the uniform sizing system and instead allowed for more ego stroking sizes.  As a result of this, today, a size 8 would have been roughly equivalent to a size 16-18 in the 1950s, obviously though this varies a shocking amount from brand to brand.

So what size was Marilyn Monroe actually?  Luckily, many of her dresses, carefully preserved, are still around to measure off of.  Further, one of her dress makers also chimed in with exact measurements he took.  Those measurements were 5 ft. 5.5 inches tall; 35 inch bust; 22 inch waist (approximately 2-3 inches less than the average American woman in the 1950s and 12 inches less than average today); and 35 inch hips, with a bra size of 36D.  Her weight fluctuated a bit through her career, usually rising in times of depression and falling back to her normal thereafter, but her dressmaker listed her as 118 pounds and the Hollywood studios tended to list her between 115-120 lbs.

As to what size Marilyn Monroe would be in women’s sizes today, that’s not an easy thing to answer due to the differing sizes from brand to brand, country to country, and the fact that her extreme hour glass shape would have made it difficult for her to find the perfect size while clothes shopping.  Lucky for her, she could afford to have her clothing custom made, which she usually did.

As a direct example of her size, the white dress she wore in The Seven Year Itch was recently auctioned off and was put on a mannequin that was a size 2, but they were still unable to zip up the dress as the mannequin was too big.  Many of her other dresses that exist from throughout her career match up to about the same, give or take an inch or two.  That being said, Marilyn Monroe at times would have her dresses so tight they’d have to be sown onto her, so something more comfortable in a size 4-ish (American) and something like an 8 in the U.K. is probably more accurate with most brands, though it should be noted that a 22 inch waist in many popular American jean sizes today would be below a 0.  So, again, the exact size is difficult to nail down thanks to the non-standardized sizing system we have today.

If you’re curious as to how that compares to modern contemporary fashion models, according to BluFire Model Registry, models are generally in the vicinity of a 34 bust; 24 waist; and 34 hips, which is very close to Monroe’s measurements of 35-22-35.  They list the average model  today at 5 ft. 8 inches, to Monroe’s 5 ft 5.5 inches.   Elizabeth Hurley, who in the above quote called Marilyn Monroe “fat”, actually has around the same dimensions: 34-24-34, though is about 5 inches taller than Monroe was.

So while it’s often lamented (rightly so) that female models and actresses today set a standard that no normal woman can realistically live up to, the same was true in the Marilyn Monroe era, minus Photoshop, even though she’s often used today as an example of how things were different “back in the day”. Probably the perception of the difference between then and now lies more in the fact that the average American is a lot bigger today.  To this point, the average American woman in the 1950s had a 25 inch waist compared to Monroe’s 22 inches.  Whereas today, the average American woman has a waist size of 34 inches, so the gap between the models and “average” was much less pronounced then.  And, of course, today we have more advanced means of photo and video editing to make the gap seem even larger, with the edited results being truly unattainable. At least a 22-24 inch waist is do-able for some with a significant amount of work via a great fitness routine and healthy diet.  A 22 inch waist that is then Photoshopped to look smaller, on the other hand, just isn’t healthily attainable, not to mention that any blemishes are also removed from pictures and film quite easily today via these modern editing techniques.