The Origin of the Loch Ness Monster 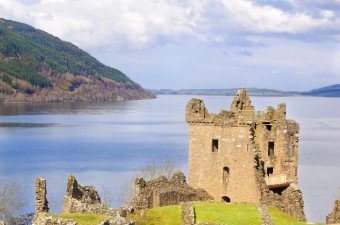 Today I found out the origin of the Loch Ness Monster myth.

Loch Ness is a long, narrow lake southwest of Inverness in the Scottish Highlands. It is the second largest loch in Scotland by surface area and the largest by volume. It is also the second deepest loch, at an astounding 755 feet (230 meters) at its deepest point. The water is dark and murky due to the high levels of peat in the surrounding soil. The breadth, depth, and low visibility of this particular loch make a prime environment for someone’s imagination to run wild, particularly when other lake monsters were plentiful in Scottish legends.

The first recorded sighting of Nessie was in 565 A.D. by Saint Columba. Saint Columba was an Irish missionary praised for spreading Christianity in Scotland. On one trip to the highlands, he ran across a group of people burying a man who had been bitten by the monster in the River Ness. The Saint supposedly asked another man present to swim across the river. When the man jumped in, the monster rose from the depths and Saint Columba, invoking God’s power, banished it. The story was written nearly a century after the supposed encounter; but even so, it remains a popular piece of “evidence” used to demonstrate Nessie’s existence.

The next recorded sighting happened over 1300 years later in 1933. George Spicer was out driving with his wife when they saw a large creature walk in front of their car near the loch. The creature supposedly had a huge body, long neck, and they couldn’t see any limbs before it lunged toward the Loch Ness. A few weeks later, a motorcyclist claimed to have nearly run into a similar creature, describing it as a type of plesiosaur—a prehistoric marine creature with four large fins and a long neck, fitting the Spicers’ description. Soon, with the building of a road along the loch’s coast, many more reports of sightings of the monster flooded in.

The 1933 sightings proved to be the beginning of a long, fruitless search for the monster. The first picture taken of the monster was in November 1933 by Hugh Gray. He supposedly saw a large creature rise above the surface of the water and snapped several photographs before it disappeared, but only one photo turned out when developed. The picture shows a creature with a long neck and a thick body, with four lumps at its side which might have been flippers. However, it should be noted that critics claim that the photo is of a dog swimming with a stick in its mouth… not remotely frightening.

Later that year, a man named Marmaduke Wetherell, a well-known big game hunter, was hired by the Daily Mail to find evidence of the Loch Ness Monster. He later found large tracks on the edge of the lake and made molds, but the Natural History Museum examined them and said they were likely from a dried hippo’s foot which had become popularly used as umbrella stands. Wetherell was fired for failing to find any substantial evidence.

On April 21, 1934, the most famous picture of the monster was published in the Daily Mail. The picture was supposedly taken by a doctor named Robert Kenneth Wilson, but he didn’t like having his name associated with the photo so it became known as the “Surgeon’s Photograph.” The picture shows, from a distance, the long neck and head of the monster rising from rippling water. The picture is convincing to the untrained eye, though critics, certain the photo was a hoax, claimed it was everything from an elephant to a diving bird.

It turns out, the photo was a hoax. (shocker) In 1994, Christopher Spurling, the stepson of Marmaduke Wetherell, admitted to being involved in creating a model of Nessie’s neck and head and placing it on a toy submarine. The pair then took the model to Loch Ness and took photos of it in the water. Wilson was then given the photos because he was a trusted man, being a doctor. Wetherell was said to have come up with the hoax because he was humiliated by his previous attempt at finding the monster.

Since then, countless videos, photos, and eyewitness accounts have emerged claiming to prove the existence of the Loch Ness Monster. In 1954, the first contact via sonar was made on Rival III, a fishing boat. 480 feet below the boat, a large “object” was seen keeping pace with the boat’s speed. In 2011, sonar contact was made again by Marcus Atkinson who saw an object about five feet long and 75 feet below the surface. It kept pace with his boat for two minutes before it disappeared. The sonar image has been examined and critics have dismissed it as an algae bloom.  However, believers have said that algae couldn’t survive at 75 feet as it needs sunlight to thrive, and as murky as the waters of Loch Ness are, very little sunlight would reach so far below the surface.

Many other searches have taken place to find the monster than those already listed. In 1934, twenty men sat at various locations around the loch with binoculars and cameras in the Sir Edward Mountain Expedition. They remained there from 9 to 6 every day for five weeks. 21 pictures were taken and examined, but they were thought to be of seals, not a monster.

In the 70s and early 2000s, Robert Rines conducted a number of underwater investigations hoping to find Nessie. His studies resulted in several underwater photographs of possible fins and tails. However, in 2008 he claimed that, based on fewer sightings and sonar readings, Nessie had likely died due to global warming…

The most recent photograph was taken by George Edwards in November 2011. Edwards claims that it is the most convincing photograph yet, which perhaps shouldn’t be too much of a surprise given advances in easy to use and readily accessible home photo editing software. However, in this case, even other Loch Ness Monster researchers have questioned the authenticity of the picture, claiming the hump rising from the water in the picture is actually a fiberglass model that was used in the filming of a documentary by National Geographic, which Edwards had participated in.

With all of the sightings and hunts for the monster, Loch Ness has become a popular tourist destination and interested parties can hop on a boat and travel around the loch looking for the famous monster. Of course, Nessie is discounted by scientists as a myth, but people need something to do with their free time and vacation dollars, and this is perhaps at least more scenic than traveling to the equator and paying to watch the different way water spins down toilets and drains depending on which side of the equator you’re on. (Note: this one’s also a myth, but you’ll be hard pressed to find a tour guide around the equator who doesn’t demonstrate the differing rotation of the toilet water based on moving about a mile on one side of the equator or the other. In fact, what hemisphere you are in has almost nothing to do with the way water spins down the drain.)