French Toast Was Not Invented in France 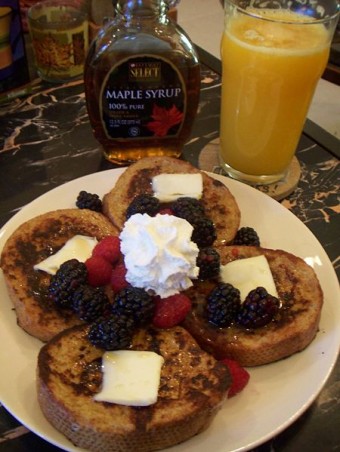 French toast was not invented in France. In fact, French toast was around long before France even existed as a country. The exact origins of French toast are unknown, but it isn’t surprising that humans seem to have come up with the recipe quickly, given that French toast is traditionally made out of stale bread. Bread has been a staple food for most cultures since food first began being prepared and, up until very recently, the vast majority of humans would have never dreamed of wasting any food; thus, one has to find a way to make stale bread palatable. Soaking it in milk and egg and then cooking it, seems logical enough, making a good tasty meal while not wasting any bread.

The earliest reference to doing just this dates all the way back to 4th century Rome, in a cookbook attributed to Apicius, and it is thought to predate this work by a good margin. This style of “French” toast was called Pan Dulcis. The Romans would take the bread and soak it in a milk and egg mixture, and then cook it, typically frying it in oil or butter, pretty much just like it’s made today in many countries in the world.

This practice became common throughout Europe in the Middle Ages, including making it primarily out of stale bread. Indeed, the name for French toast in France itself is “pain perdu”, which literally means “lost bread” (it is also called this in Belgium, New Orleans, Acadiana, Newfoundland, and the Congo, among other places). It’s interesting to note, for the naysayers who like to cling to the belief that it came from France, that before the French called it pain perdu, they called it “pain a la Romaine” (Roman bread).

Another popular myth as to the origins of the name “French toast”, perpetuated in such publications as Why Do Donuts Have Holes, is that French toast actually came from America, specifically, being created in 1724. The name “French” came from the chef who first made it, Joseph French. Supposedly, Mr. French was bad at grammar and when he named it, simply forgot the apostrophe, as in: Frenchs toast, instead of French’s toast. Alas, if only the Grammar Nazis of the day would have corrected him.

This story, of course, is pure fiction as there are numerous references throughout history of what is now called, in North America, French toast. Indeed, there are numerous cookbooks from the middle ages throughout Europe that even give the classical recipes for French toast. Further, the name “French toast” pre-dates the 18th century, with the earliest references popping up in the mid-17th century, before the story of the grammatically inept Joesph French. Before that time, it was also known as German toast, Spanish toast, and a variety of other names, only some of which had anything to do with the name of a country.

North Americans call it French toast for very similar reasons as to why they call fried potato strips “French fries”. Simply that they were popularized in America by French immigrants. Note: for more on the fascinating history of the French Fry, check out Misconception Junction’s companion site Today I Found Out: The History of French Fries

Recipes For French Toast Through Time: