Why is U.S. Paper Money Green? 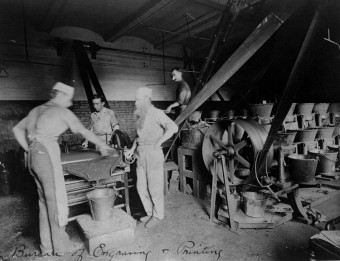 In Article I of the U.S. Constitution, ratified on June 21, 1788, Congress was granted the power to “coin money” and “regulate” its value, but not to issue paper money. The result of the near complete devaluation of the paper money printed to fund the Revolution (bills called “continentals” since they were issued by the Continental Congress, see: A Capital Idea- How a Pile of Unpaid Bills Led to Washington, D.C.), many delegates of the Constitutional Convention simply had lost faith in the efficacy of paper money, and made no provision for it.

Thus, for the first 73 years of the country’s history, the U.S. relied on coins it minted, foreign coins (since the U.S. lacked sufficient precious metals to mint enough of their own), and paper money issued by private, state-chartered banks. Producing bills of various designs and values, by the time the U.S. Congress had gotten around to issuing its own paper money, approximately 8,000 different private entities within the United States had already produced some form of paper currency.

With the resulting confusion over valuation and authenticity, counterfeiting of the private notes was rampant. Thus, when Uncle Sam decided it needed to issue paper currency of its own to fund the Union effort in the Civil War, first in the form of fifty million in Demand Notes in 1861 and later passing the Legal Tender Act of 1862 authorizing issuing $150 million (about $4 billion today) of U.S notes, the possibility of forgery was forefront on everyone’s minds. (Fun fact- Abraham Lincoln officially established the Secret Service on the day he was assassinated, with this new organization tasked with, not protecting him, but stamping out such rampant counterfeiting.)

This all brings us back to green money.  While it’s often stated, even by otherwise reputable sources, that it isn’t definitively known why the color green was chosen for use with United States paper money, the truth of the matter is that (after an amazing amount of digging), it turns out the reason for choosing green couldn’t be better documented.

This documentation is primarily courtesy of a case brought before the New York Supreme Court in 1865- Tracy R. Edson vs The American Bank Note Company. In this case, numerous primary documents explain in painstaking detail why the color green was chosen for American currency. With a little further digging, more of the backstory was revealed as well.

Funny enough, it all started with a Canadian- Dr. Thomas Sterry Hunt.  In 1857, at the behest of the president of the City Bank of Montreal, William Workman, Dr. Hunt developed and patented (in Canada) a new anti-counterfeiting ink. You see, the City Bank of Montreal, like so many other banks, issued their own notes. As was the case with other institutions of the day, their notes suffered from rampant counterfeiting thanks in part to the advent of certain photographic technologies.

Enter another Canadian- George Matthews.  Upon learning of this new anti-counterfeiting ink, Matthews almost immediately purchased the rights to it from Hunt.  He then turned around and patented the ink in the U.S. (patent #17688) claiming he’d invented it and explaining the ink was made from:

…calcined green oxide of chromium, (known to chemists as the anhydrous sesquioxide of chromium,) which I mix with burned or boiled linseed-oil, sometimes called printers varnish, in the manner usual in preparing ink for printing bank-notes or other instruments by either of the above processes of printing.

After patenting it in the United States, Matthews turned around and licensed all rights to this patent to one Tracy Edson, who along with his cohorts (Rawdon, Wright, and Hatch) within a year would partner up with several other of the most prominent security printers in the United States to form the American Bank Note Company in 1858.

But we’re getting ahead of ourselves. Upon acquiring exclusive rights to the ink, Edson and co. wasted no time in investigating whether this ink really did make bank notes printed with it in a certain fashion impervious to counterfeiting.  They soon announced in the following letter (which also explains why this ink was thought so special over others) that they had a method to finally beat counterfeiters :

To the Banking Institutions of the United States:

In consequence of the great danger to our paper currency from successful counterfeits, made by photography and kindred processes, it has become evident that a NEW SECURITY is needed, which, while it shall perfectly protect our bank notes from photographic imitations, and from alterations in their denominational value, shall, at the same time, preserve that security which is always afforded by artistic and highly finished engraving.

The undersigned beg leave respectfully to announce to the Banking Institutions of the United States, that they have carefully investigated this subject, and that they are now prepared to furnish the most perfect possible protection against all the above descriptions of fraud.

The process consists in the use of TWO PERMANENT INKS, conjointly, in printing bank notes, and other documents representing value.  One of these is the ordinary BLACK bank note printing ink, which, having a basis of carbon, is insoluble and indestructible; the other is an equally insoluble and indestructible GREEN-COLORED INK, which cannot be removed from the paper, without also removing the black ink, and thus destroying the note.

It is an established principle in photographic chemistry, that red, yellow, and green colors act upon the photographic plates almost precisely like black; so that lines or figures of these colors will appear black in photographic copies.  The use of colors, has therefore, been resorted to as a protection against photographic counterfeiting.  Unfortunately, however, all the colored inks heretofore used upon bank notes, for this purpose, as red, yellow, and blue, can be removed with more or less facility, by chemical means, without disturbing the note itself, when printed in the black carbon ink.  These colors being removed, the black can be copied by photography and the colors being afterwards added by lithography, or otherwise, a COUNTERFEIT is obtained, which is the more dangerous from the fancied security afforded by the colors.

The use of fugitive black or blue inks, printed upon a colored ground, has been resorted to as a protection against photography.  But these inks are liable to fade on exposure to light or air; and as it is possible to efface from notes thus printed the black design, by chemical means, without disturbing the red or yellow ground, and to print another in its place, the use of fugitive inks afford great facilities for alterations; while the distinctive characteristics of the fine engraving are lost, and the note is rendered easier of imitation by the ordinary counterfeiter, and its detection more difficult.

The use of the BLACK CARBON INK above referred to, for printing bank notes, conjointly with an equally INSOLUBLE AND INDESTRUCTIBLE COLORED INK, in connection with the highest style of line engraving, would unite, in the greatest degree, the best safeguards against all the various species of fraud to which surety paper is exposed.

A bank note thus printed in TWO PERMANENT INKS, would be protected against the possibility of imitation by photography, and by the lithographic and anastatic processes of copying; while its denominational value could not be altered by any chemical means. Such a note could also be made to unite the security afforded by the highest artistic excellence, against counterfeiting by the engraving process; and the beauty of design and general appearance of the note would be preserved.

The GREEN COLOURED INK, recently patented, has been submitted to the examination of several of our most distinguished chemists, and other gentlemen, who, from their practical experience, are competent to decide a question of this kind.  They have subjected it to the most severe tests known to chemical science; and the ink having been pronounced by them to possess the requisite properties, we offer it, with entire confidence, as affording the desired protection when applied in the manner above proposed.

Referring to the accompanying documents, and specimen of printing in the two permanent inks, we are,

As mentioned in the letter, also furnished as supporting evidence of their claims were letters from numerous chemists and photographers attesting to the fact that, despite their sincerest efforts, they could find no way of perfectly copying the bank notes that had both the carbon black ink and the new Patent Green Tint ink.  For instance, in this letter from Photographer Charles D. Fredricks, dated May 29, 1857, he notes:

Gentlemen: Agreeably to your request I have made numerous experiments, by various processes upon the green tinted bank-notes submitted by you, for the purpose of determining the ANTI-PHOTOGRAPHIC POWER OF THE GREEN INK in which they were printed.

The result is that, in all cases, the portions printed in GREEN, as well as those printed in black, appear only in BLACK in the photographic copy.  And I do not hesitate to say, that it is impossible to make a counterfeit by photography of any bank-note upon which this green tinge is printed by you, in connection with the black ink ordinarily used in printing bank-notes.

Needless to say, the new anti-counterfeiting ink was a hit and was adopted by numerous banks for their bank notes of various designs.

In 1860, after these types of bank notes had been in the wild for a couple years, notes using this ink still seemed impervious to counterfeiting by ordinary measures, as noted by Professor Wolcott Gibb of New York on June 24, 1860:

In reply to your letter, I have to say that I have seen no reason whatsoever to change the opinion which I expressed in my report of June 3d, 1857, in relation to the durability of the Patent Green Tint. No chemical agent has been discovered which will destroy its color, when properly prepared, and I consider it as one of the most fixed and permanent tints which chemistry can produce. 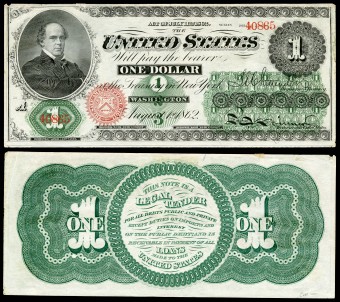 So, when the Federal Government was looking to print the currency that would become known as “greenbacks” in 1861, they ordered the American Bank Note Company to print them using carbon black and their Patent Green ink, earning the company a cool $5 ($133 today) per thousand notes they printed.

Of course, as so often happens, it was soon discovered that at least some counterfeiters had little trouble figuring out ways to remove the green ink without harming the paper or black ink, and thus the currency was easily counterfeited as described in the preceding Edson and co. letter. The war against counterfeited currency continued, and still continues to this day, with green remaining a primary color of U.S. paper currency through it all.

While in modern times this is more due to tradition than anything else, there was a prime opportunity to change the principal coloring in 1929 when smaller notes were introduced and things became a bit more standardized with some new designs. (For instance, earlier editions of U.S. currency had an average dimension of 7.375 x 3.125 inches, rather than the current 6.125 x 2.625 inches.)  However, according to the U.S. Bureau of Engraving and Printing, the U.S. chose to stick with the green color because the then incarnation of it was still relatively resistant to chemical and physical changes compared to other readily available inks, they had large quantities of it available, and they felt that “green was psychologically identified with the strong and stable credit of the Government.”