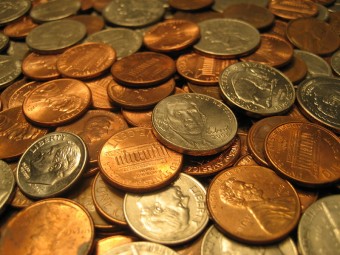 Today I found out why some coins in the United States have ridges.

Putting ridges on some coins in America got its start back in the 1700’s.  At this time, coins were actually made of materials that were worth what the coin was worth.  For example, a half dollar silver coin contained fifty cents worth of silver.  Likewise, a $10 gold coin contained $10 worth of gold.

As a consequence of this, people started to shave off bits of these coins around the edges; so now a $10 gold piece only contained, say, $9.50 worth of gold. The payoff came from that if they were very careful when they shaved the coins, it was very difficult to tell that anything had been shaved off, so they could still generally get their $10 worth out of the now $9.50 piece. Over time, they’d collect the shavings and when they had a large enough amount, go sell them.

Eventually, the government decided to do something about this and one of the methods to combat this practice was to add ridges to these coins; something known as “Reeding” the coins.  With the ridges on the edges, it became significantly more difficult to shave anything off the coins without detection.  They chose not to do so with smaller valued coins that came out later, pennies and nickels, because  the metals these coins were made of weren’t valuable enough for shaving them to be worth the effort.

So that was then, why do they still do it today when the coins are no longer made of valuable metals?  Initially, supposedly it was because it was easier and cheaper than modifying the existing machinery.  Today however, it is to help the visually impaired to more easily distinguish between coins of a somewhat similar size like a penny and a dime.   This is something unfortunately not done with today’s American paper money, which is indistinguishable to blind people without resorting to tricks like folding them certain ways for different bills, Braille money stampers, or much more recently special apps which will identify the bills for them. Excepting via an app, the blind still need someone to tell them what the bill is in the first place when they receive it, so they can do whatever they do to it to be able to distinguish it later on their own. Although, supposedly the government is working on this problem with one of the most popular suggested solutions being to adopt the new Canadian system of imprinting the bills with Braille.