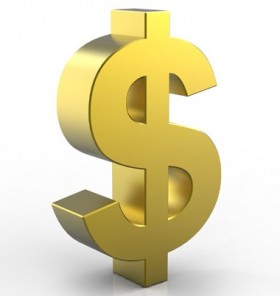 Today I found out where the dollar sign ($) comes from.

This symbol first showed up in the 1770s, appearing in documents of English-Americans who had business dealings with Spanish-Americans.  However, it wasn’t until the very early 1800s that it became popularized, around the same time as the first official U.S. dollars were being minted.  Previous to this, the symbol had already been in use as an abbreviation for names of Spanish currency, namely as an abbreviation for the Spanish peso “p”.

When writing up financial documents and having to write “ps” numerous times, it started to become common among the English-American colonists to merge the “p” and the super scripted “s” as one.  The top half of this symbol then produces something looking very much like a double vertical lined dollar sign.

In an even further bout of laziness, it became common among the English-American colonists to write the “p” with just one downward stroke vertically slashing the “s”, thus the ‘$’.  In some of the earliest documents containing this short hand, it was common to see both the double slashed version as well as the single slashed version in the same document, referring to the same thing, the Spanish peso.

How then did this symbol that originally denoted pesos spread to also denote the U.S. dollar?  Around the same time the U.S. was minting its first dollar coins, in 1792, Spanish currency was extensively circulated in the U.S. and around the world.  In large part due to this, the U.S. chose to design the U.S. dollar coins to duplicate the Spanish coins, in terms of matching the material and weight, hence value (at the time, the coins were made of silver and valued after the price of silver).  Doing this allowed the U.S. coin to be exchanged for a peso in a 1 to 1 exchange.  Thus, it was natural to use the same symbol to denote the U.S. dollar as was used for the Spanish peso.