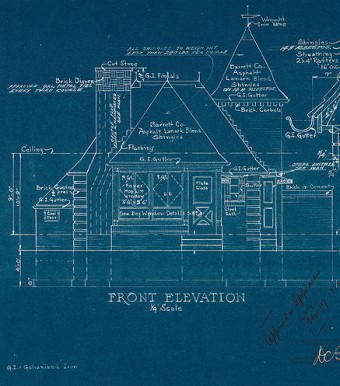 Making copies of architectural drawings hasn’t always been the easiest thing in the world to do. For the majority of human history, the most economical solution was simply to have someone make a tracing of the original plans.

In the mid-nineteenth century, the process abruptly became much quicker and easier thanks to famed polymath Sir John Herschel. In 1842, Herschel invented a method to easily copy drawings using potassium ferrocyanide and ammonium iron citrate.

The exact method, called cyanotype, is performed as follows. First, you take a drawing of the plans done on relatively translucent tracing paper or cloth and place it on top of and attach it to paper (or sometimes linen, Mylar, etc.) that has been previously soaked in a mixture of the aforementioned two chemicals, then dried. Next, you expose the papers to a bright ultra-violet light source, such as the Sun, for several minutes.

The result is that the paper soaked in the chemicals ends up turning blue as the chemicals react to the light and form a compound called blue ferric ferrocyanide, also known as “Prussian Blue.”

This wouldn’t be very helpful for making a copy of a document except for the fact that where the light cannot penetrate the translucent paper, namely where the drawing marks are, the coated paper remains the original color of the paper, usually white, effectively making a nice copy.

You might see a potential problem here in that you then can’t expose the un-blued bits to any bright light source at first, but this problem is easily solved by simply washing the chemicals off, then allowing the paper to dry. At this point, the copy is complete.

Within a few decades of the discovery of this method of copying (as well as other blue-printing methods such as one developed by Alphonse Louis Poitevin in 1861 using ferro-gallate), the price dropped to about one-tenth the cost of having someone simply trace the original plans, helping the popularity of blueprints explode.

In the mid-twentieth century, copying methods such as as diazo prints, and then later xerographic prints, finally supplanted blueprints. Much more recently, simply sticking with digital versions of plans has become popular, with these having the advantage of being easy to modify and distribute as needed during the construction process.

Despite the technological changes and the fact that these plans usually aren’t on blue paper anymore, in popular vernacular the term “blueprints” has stuck around anyways.