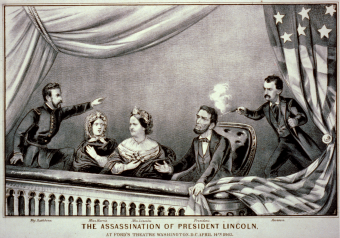 Today I found out Abraham Lincoln established the Secret Service on the day he was shot by John Wilkes Booth.

Unfortunately, even had the organization been instituted earlier, it wouldn’t have helped.  The Secret Service in the beginning had no part in protecting the President, but rather were tasked with cutting down on the amazing amount of counterfeit money circulated in the United States at the time (hence why until March of 2003 they were a branch of the U.S. Department of the Treasury).  It is estimated that about 1/3 of the U.S. currency in circulation was counterfeit when Lincoln signed the piece of legislature that would establish the Secret Service.

Lincoln did technically have a permanent assigned guard on the night of his murder, but a more inept guard they could not have found for the President.  The man was  policeman, John Parker.  How did Parker get such an illustrious job as one of the four hand-picked to guard President Lincoln?  It’s a mystery.  As a policeman, Parker frequently found himself in front of police boards for such things as being drunk on duty, sleeping on the job, frequenting brothels on the job, and a myriad of other charges that basically all came down to “conduct unbecoming an officer”.

Despite this, Parker managed to get off each time he went before the boards.  For the “sleeping on the job” charge, he supposedly claimed that he was performing his duties patrolling his area when he heard several ducks quacking on top of a trolley car.  Naturally, he climbed up top to see what was going on… and promptly fell asleep.

As for frequently visiting brothels while on duty, he supposedly defended himself by claiming that he was not actually there as a customer, but rather to visit certain of the ladies privately as they had called for a police officer; so it was naturally his job to go hear what they had to say and, of course, they wanted to talk to him privately…

Through all this, not only did he manage to keep his job, but when the death threats against President Lincoln became severe enough, Parker was selected with three others to be the President’s guard.  It is theorized by some that this was because he may have been related to Lincoln’s wife, Mary Todd Lincoln, through her mother’s family.  Mrs. Lincoln is known to have written a letter on Parker’s behalf to get him out of the draft, so at least there was some association there, whether family or not.

Unfortunately for the President, on the night he was assassinated, it was Parker’s shift, and not one of the other three who had outstanding records as policemen.

So where was John Parker when President Lincoln was being shot in the head? No one is quite sure.  He did in fact start off the evening guarding the President as he was supposed to.  But as he couldn’t see the play from his guard position, he left to find a better location from which to watch.

During intermission, he is known to have left with the President’s coachman to go to the Star Saloon for some drinks.  Incidentally, some accounts claim around that same time John Wilkes Booth could also be found drinking at the Star Saloon.

After this, no one is quite sure where Parker was when he was supposed to be guarding the President.  The important part is that he was not at his guard post.  This may or may not have mattered though.  Even had Parker been there, he very likely would have let Booth in to see the President, as Booth was a famous actor at the time and Lincoln had even been at Ford’s Theater to see one of Booth’s plays in 1863.  That being said, Booth would have likely been announced in that case, perhaps making it more difficult for him to deliver a fatal shot.

As fellow Presidential guard William H. Cook stated, “Had [Parker] done his duty, I believe President Lincoln would not have been murdered by Booth… Parker knew that he had failed in duty. He looked like a convicted criminal the next day.”

As with the case of Booth being announced had Parker been there, who knows what would have happened if Robert Lincoln had decided to attend? But it’s not farfetched to think the President would have had a much better chance had he been aware of Booth’s presence.  At the least, it likely would not have been a head shot as Derringers were notoriously inaccurate unless at extremely close range, so Booth would have probably aimed for the abdomen if he hadn’t been able to get directly behind the President.  But who knows?  Maybe he would have gone in close for a handshake and got off the shot at close range anyways.

As to Parker’s excuse for not being at his post, according to Lincoln’s dressmaker, Elizabeth Keckley, Parker had this to say to Mary Todd Lincoln after she accused him of murdering her husband:

I could never stoop to murder, much less to the murder of so good and great a man as the President. I did wrong, I admit, and have bitterly repented. I did not believe anyone would try to kill so good a man in such a public place, and the belief made me careless.

Now you might think that Parker would finally see some real consequences for his dereliction of duty with this one.  I mean, he was the President’s guard and wasn’t at his post and possibly partially drunk at the time of the assassination.  But, no… the charges against Parker were dismissed, though he was tried. (The transcript of that event has unfortunately been lost).  In addition, the fact that Parker had been away from his post at the time of the murder was not mentioned in the official report on the Lincoln Assassination nor was it mentioned in major news reports of the day, so Parker avoided the public’s wrath too.

Not only this, but Parker managed to keep his job, though at least now not guarding a President directly.  His new position was as White House security, including being assigned to protect Lincoln’s widowed wife.

So did Parker learn his lesson after such a dramatic occurrence?  Nope.  After three more years of spotty service, he was finally fired on August 13, 1868 for sleeping on the job.  Ironically, Parker and his family are buried in a cemetery that borders Lincoln Road (Glenwood Cemetery).