How Did the Cold War Start and End? 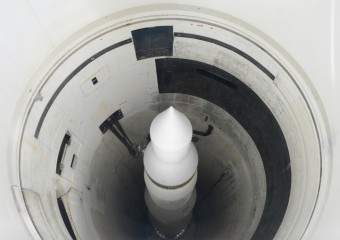 The Cold War was the geopolitical, ideological, and economic struggle between two world superpowers, the USA and the USSR, that started in 1947 at the end of the Second World War and lasted until the dissolution of the Soviet Union on December 26, 1991.

The Cold War was marked by continuous rivalry between the two former World War II allies.  Conflict spanned from subtle espionage in the biggest cities of the world to violent combat in the tropical jungles of Vietnam.  It ranged from nuclear submarines gliding noiselessly through the depths of the oceans to the most technologically-advanced satellites in geosynchronous orbits in space.  In basketball and hockey, in ballet and the arts, from the Berlin Wall to the movies, the political and cultural war waged by Communists and Capitalists was a colossal confrontation on a scale never before seen in human history.

One of the earliest events in the origin of the Cold War arose from the anti-Communism remarks of British leader Winston Churchill.  On March 5, 1946, in a famous speech characteristic of the political climate of the time, he said:

From Stettin in the Baltic to Trieste in the Adriatic an “Iron Curtain” has descended across the continent. Behind that line lie all the capitals of the ancient states of Central and Eastern Europe. Warsaw, Berlin, Prague, Vienna, Budapest, Belgrade, Bucharest and Sofia; all these famous cities and the populations around them lie in what I must call the Soviet sphere, and all are subject, in one form or another, not only to Soviet influence but to a very high and in some cases increasing measure of control from Moscow.

What some historians call anti-communism, others analyze as fear, because Stalin, shortly after invading Berlin, had gone on to conquer all of Eastern Europe. The Americans responded to Stalin’s maneuvers in Eastern Europe with the Marshall Plan, a generous provision of free financial aid for the reconstruction of war-torn Western Europe.

The Soviets responded to the Marshall Plan with the Zhdanov Doctrine, unveiled in October of 1947.  The Zhdanov Doctrine claimed that the United States was seeking global domination through American imperialism, as well as the collapse of democracy.  On the other hand, according to this Doctrine, the Soviet Union was intent on eliminating imperialism and the remaining traces of fascism, while strengthening democracy.

The Americans reacted to the Zhdanov Doctrine with the so-called “Long Telegram,” written by George Kennan, Deputy Chief of Mission in Moscow, saying in part:

Soviet power, unlike that of Hitlerite Germany, is neither schematic nor adventuristic. It does not work by fixed plans. It does not take unnecessary risks. [It is] Impervious to [the] logic of reason, and it is highly sensitive to [the] logic of force. For this reason it can easily withdraw—and usually does when strong resistance is encountered at any point.

Because of George Kennan and his Long Telegram, official US policy became the “containment” of Communism.

The Soviet Union and the United States, two nations that had never been enemies on any field, and which had fought side by side during WWII, were now undeclared enemies in a war that would never break out in the open, but which would last for more than fifty years.

When in 1949 the Soviet Union developed its first atomic bomb, the confrontation between the USA and the USSR escalated to the nuclear level, and humanity trembled at the prospect of a global nuclear catastrophe.

The 1950s introduced America to one of the darkest and most illiberal ideas in its political and social history – McCarthyism.  The government, and even private enterprise, recklessly accused thousands of Americans of being Communists or fellow travelers and sympathizers, and subjected them to interrogation, investigation and sanctions.

The outstanding features of McCarthyism were the Hollywood blacklisting of artists and intellectuals, and the notorious “Hearings” of the House Un-American Activities Committee- perhaps the most ironically named committee in the history of the United States.  McCarthyism became a broad political and cultural phenomenon that ultimately tarnished the benevolent global reputation of the United States.

The Cold War continued even after McCarthyism was largely exposed as paranoia and self-serving propaganda.  John F. Kennedy was elected to the presidency 1960, and shortly after, two crises erupted.  In August of 1961, the USSR erected the Berlin Wall, designed to stem the increasing number of East Germans who were fleeing Communist East Berlin to the West.  The exact number will never be known, but perhaps as many as two hundred East Germans were shot and killed trying to escape over the Wall.

Then in 1962, the Cuban missile crisis exploded, and the world was a breath away from nuclear war. How close did we come? During the crisis, a captain and political officer aboard one of the Soviet’s subs equipped with a nuclear missile came to believe a nuclear war had already begun and decided to launch their nuke against the United States.  The two, being in agreement, had the authority to launch. The only thing that stopped them was the vehement arguments from one man: Vasili Arkhipov, the man who saved the world.

What started the crisis? In 1959, Cuba had fallen under the leadership of Fidel Castro, who had rejected American influence to ally himself with the Soviets.  In the fall of 1962, American spy planes discovered that Castro was installing Soviet nuclear missiles capable of quickly striking targets in the US. The United States navy blockaded Cuba, preventing Soviet deliveries of war materials. For a heart-stopping time the world lurched toward nuclear war.  Eventually, Soviet leader Nikita Khrushchev agreed to remove Soviet missiles on the island in exchange for the American withdrawal of equally strategically placed missiles from Turkey.

From 1962 to 1975, the United States was involved in the war in Vietnam, where the Soviets supplied the Viet Cong with munitions; while during the Soviet invasion of Afghanistan from 1979 to 1988, America supported the Afghan Mujahideen. Nevertheless American and Soviet soldiers were never to confront one other on a field of battle.

During the 1960s, the space race became a much more peaceful, and beneficial, battlefield- this time for technological and ideological superiority.  The Soviets took the lead on October 4, 1957, when they launched Sputnik 1, the world’s first artificial satellite.  They followed up by shooting the first human, Yuri Gagarin, into space in 1961 and the first woman, Valentina Tereshkova, in 1963.  Soviet cosmonaut Aleksei Leonov was the first to leave his spacecraft and go for a spacewalk, almost getting stuck out there in the process. The culmination of the space race occurred on July 20, 1969, when the US responded to the Soviet achievements with the Apollo 11 landing on the moon and Neil Armstrong’s “giant leap for mankind.”

But it was the battles between the two nations over athletics that were, perhaps, the most entertaining – and the most harmless as well. Except for the US boycott of the Moscow Olympics in 1980 and the corresponding Soviet boycott of the 1984 Olympics in Los Angeles, most sports contests had some underlying political tension but no overt political content. Two outstanding upsets – the first-ever defeat of the United States in an Olympic basketball tournament in Germany in 1972, matched by the 1980 “Miracle on Ice” defeat of the Soviet hockey team in the Winter Olympics at Lake Placid, New York – have become legends of modern pop culture.

During the 1980s, the crumbling of the economic and political structures of the Soviet Union became increasingly apparent.   By 1985, when Mikhail Gorbachev came to power, the Soviet Union was embroiled in disastrous economic problems.  In addition, the Soviet satellite states in Eastern Europe were abandoning communism one after the other.

In 1988, the Soviet Union abandoned its nine-year war in Afghanistan.  Next, Gorbachev refused to send military support to defend the previous satellite states of the USSR, greatly weakening their Communist regimes.  This was the backdrop for Gorbachev’s visit to East Berlin in the fall of 1989, where his speech advocating freedom of communication with the West spurred popular agitation in East Germany.  Demanding reunion with their families, East Berliners pulled down parts of the Wall and climbed across into West Berlin. The destruction of the Berlin Wall, of great symbolic importance, finished off the Iron Curtain, and the following year saw the reunification of Germany.

That same year, the Russian Confederation convened a new congress, electing Boris Yeltsin as president and passing laws that ousted the Soviets from Russia. This kind of political and legal instability continued throughout 1990 and 1991 as many of the Soviet republics gradually became de facto independent.  Most of the allied and pro-Soviet regimes in Eastern Europe finally collapsed, and Gorbachev wanted to end the Cold War.

Horrified by these developments, in August of 1991 extremist elements among the remaining Communist Party leaders confined Gorbachev to house arrest in his dasha in the Crimea in what became known as the August Coup.  Boris Yeltsin whipped up a violent resistance in Moscow, blockading the conspirators’ military vehicles.  He even persuaded the commander of a tank battalion to side with the Russians against the Soviets, at one point standing on a tank to address the crowds.  The coup was suppressed, and Yeltsin was hailed as a hero.

The failure of the August Coup marked the end of the Soviet Union. Yeltsin entered into agreements with the leaders of other Soviet republics for the dissolution of the USSR, replacing it in December of 1991 with a “Commonwealth of Independent States.” On December 25, 1991, Mikael Gorbachev, who was still the highest Soviet official, officially recognized the bankruptcy and collapse of the Soviet Union. The USSR was dissolved. The extremely powerful socialist state on the Eurasian continent that had influenced world history from 1922 to 1991 disappeared forever, and the Cold War finally came to an end.