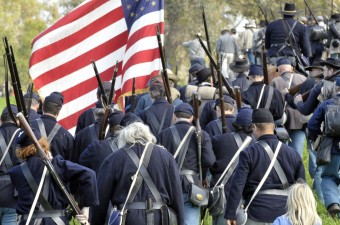 On this day in history, September 17, 1862, the Battle of Antietam in the American Civil War was fought.

In the early morning hours, about 75,000 Union and 38,000 Confederate troops faced off near Maryland’s Antietam Creek in the deadliest single day of battle America had ever seen.

The Battle of Antietam was the culmination Confederate Commander Robert E. Lee’s initial invasion of the Union states. Leading his Army of Northern Virginia over the Potomac River in September 1862, he took a gamble and divided his already wildly outnumbered soldiers, sending half of them to take control of the Union garrison at Harper’s Ferry, under the command of the great Thomas “Stonewall” Jackson.

Major General George B. McClellan was in command of the Union troops responsible for defending Washington D.C. against the enemy, per direct orders from President Lincoln. McClellan’s Army of the Potomac first did battle with Lee’s men on September 14th, and the Confederates had no choice but to retreat.

Lee almost headed back toward Virginia, but on September 15th, the news reached him that Jackson had captured Harpers Ferry. This news resulted in him changing his mind and instead, he chose to make a stand at Sharpsburg, Maryland.

Both the Union and Confederate armies were gathering on opposite sides of Antietam Creek on September 15th and 16th. Over those two days, watching the numbers of blue coats and gray coats pile up on either side of the river must have been harrowing.

Naturally, both sides had battle plans worked out in advance, but when fighting commenced on the foggy morning of September 17th, strategy broke down into a series of slapdash advances that turned the battle into little more than butchery for both sides.

Even after eight hours of this brutality, the Confederates were bruised but not beaten, though they had suffered the loss of several thousand injured and dead. As this was going on, Union General Ambrose Burnside, who sideburns were named after, commenced an attack on the Confederate right, and around 1 p.m. took the bridge that now bears his name. Burnside had to break to reorganize his troops, and the Confederates took this chance to bring in reinforcements and hold back the Union advance.

By sunset, both armies were still holding their ground, despite the horrific number of causalities inflicted that single day. Over 100,000 soldiers engaged in the Battle of Antietam, nearly 23,000 of those suffered some sort of significant injury, and another 4,000 lost their lives directly.

When the morning of September 18th dawned, both sides tended to their wounded and buried those they had lost. That evening, General Lee marched his army back to Virginia.

Thanks to this victory, shortly thereafter President Lincoln had the necessary political clout to issue the Emancipation Proclamation, which added the abolition of slavery as one of the Union objectives in the Civil War.

The Emancipation Proclamation was a master stroke by Lincoln.  At the time, the British were actively supporting the South, even though slavery had been more or less outlawed throughout the British Empire since the Slavery Abolition Act of 1833, excepting with the East India Trading Company territories and certain other “apprentice” stipulations for slaves over the age of six, which were subsequently removed in 1838. They’d also outlawed slave trading further back in 1807.

By Lincoln using his war powers to free slaves in ten states, via the Emancipation Proclamation (freeing 3.1 of the 4 million slaves in the U.S., though only 20,000-50,000 immediately who lived in areas controlled by the Union), he made emancipation of slaves the explicit point of the war.  As such, the British and the French, among other European powers, could no longer aid the South, or it would seem as if they were supporting slavery.

This also eased tensions between several European powers and the Union, such as Britain.  It further had the effect of numerous slaves attempting to escape to Northern lines where they’d instantly be free, undermining the South’s labor forces.