This Day in History: September 18th 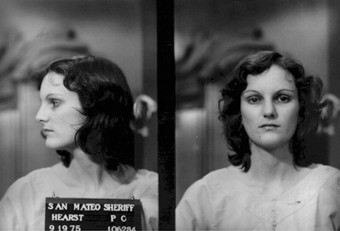 On February 4, 1974, Patty Hearst, the 19-year-old heiress to the Hearst newspaper empire, was abducted from her apartment in Berkeley, California by three armed assailants. Her fiancé, Stephen Weed and a neighbor who rushed to the scene to help the girl were both tied up and beaten by the kidnappers.

Onlookers observed a fighting, blindfolded Hearst being whisked away and put into the trunk of a car. Neighbors who came outside to see what the commotion was about quickly had to take cover when the abductors left in a hail of bullets to cover their escape.

Three days later, a letter arrived at a Berkeley radio station from a small radical left-wing organization called the Symbionese Liberation Army (SLA), proclaiming the group was holding Ms. Hearst as a “prisoner of war.”

Four more days passed, and the SLA demanded that the Hearst family provide $70 ($321 today) worth of food for every hungry person from Los Angeles to Santa Rosa. When this was accomplished, the SLA said they would begin negotiations for the return of Patty Hearst to her family.

Her father, Randolph Heart, hesitantly, gave away approximately $2 million ($9.1 million today) worth of food. The SLA told Hearst he’d have to do better than that, and told him to cough up $4 million more. Hearst said he would only donate the additional money if Patty was released unharmed.

In April, Patty allegedly went from victim of the SLA to member of the SLA. In a tape that was sent to law enforcement officials, Patty states firmly that she is joining the SLA of her own free will. To drive the point home, a few weeks later a surveillance camera caught her actively participating in the armed robbery of a San Francisco bank. Patty was also sighted during the robbery of a Los Angeles Store.

It was the beginning of the end for the Symbionese Liberation Army when police raided the group’s L.A. headquarters on May 17, killing six of the group’s nine members, including the leader Donald DeFreeze. Patty and the two other members wanted for the April bank robbery were not present at the time of the raid.

Then, on September 18, 1975, after a wild ride lasting over a year with her kidnappers turned co-conspirators, Patty/”Tania” (her SLA name) was arrested in San Francisco for armed robbery. She later claimed that she had been “brainwashed” by the SLA, but the jury was wasn’t buying it, and she was convicted and sentenced to 7 years in prison. President Jimmy Carter later commuted her prison sentence and she was released in 1979, and in 2001 she received a full pardon from President Clinton.

Patty went on to marry and have two children. She has also had small parts in two John Waters films, and has even done some modeling. No-one can say she hasn’t had a colorful life!