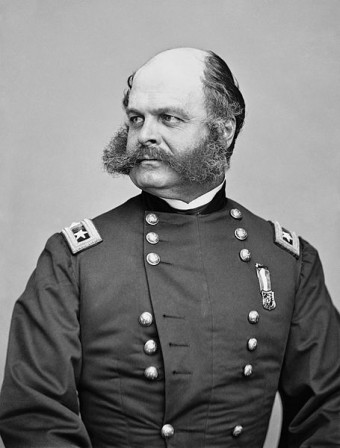 Today I found out why sideburns are named as they are.

It turns out, despite this particular brand of facial hair style being around as far back as at least 100 BC (with one of the earliest known instances being in a mosaic of Alexander the Great), sideburns were named after a specific man in the late 19th century.

While an extremely poor General, something he himself was well aware of, Burnside’s popularity as a General and later politician, in combination with the fairly unique formation of his whiskers, helped start something of a new facial hair trend.  Around the 1870s-1880s, this gave rise to this facial hair style being named “burnsides”.

Within a few years of this, the facial hair down the side of one’s cheeks, rather than being called “mutton chops” as it was at the time in some regions, began being called a modification of “burnsides”, “sideburns”, with the first documented instance of this being in 1887.  Presumably the shift was from the fact that this part of the “burnsides” facial hair style was on the sides of the face- and of course, leaving the “burns” part in in homage to the aforementioned style.

Shortly after “sideburns” popped up, an alternate “sideboards” also made its debut, with “boards” thought to have been shortened from “border”, so essentially “side-boarder”, which is a fitting description of the style.