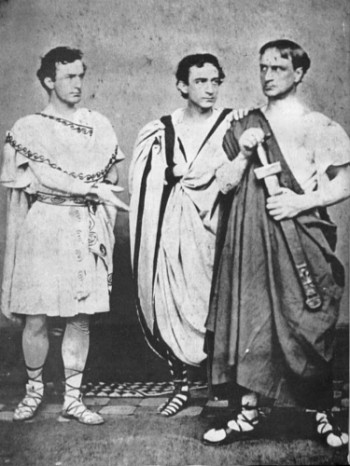 As a general rule, historical anecdotes that seem a little “too perfect,” like “John Wilkes Booth’s brother saved the life of Abraham Lincoln’s son shortly before Lincoln was assassinated,” when researched thoroughly almost never turn out to be true.  This, however, is one of the exceptions to that rule and it was no less than Robert Todd Lincoln himself who, in a letter to the editor of Century Magazine, Richard Gilder, in 1909 recounted the story of how Edwin Booth had saved his life.

The exact date of the event isn’t known, but it apparently took place sometime around late 1863 to early 1865 at the Jersey City railroad station, shortly before the assassination of Abraham Lincoln by John Wilkes Booth.   Robert Lincoln recounted the tale as follows:

The incident occurred while a group of passengers were late at night purchasing their sleeping car places from the conductor who stood on the station platform at the entrance of the car. The platform was about the height of the car floor, and there was of course a narrow space between the platform and the car body. There was some crowding, and I happened to be pressed by it against the car body while waiting my turn. In this situation the train began to move, and by the motion I was twisted off my feet, and had dropped somewhat, with feet downward, into the open space, and was personally helpless, when my coat collar was vigorously seized and I was quickly pulled up and out to a secure footing on the platform. Upon turning to thank my rescuer I saw it was Edwin Booth, whose face was of course well known to me, and I expressed my gratitude to him, and in doing so, called him by name.

Edwin Booth, who was a strong support of Lincoln and a Unionist, something which had put a wedge in he and his brother’s relationship, had apparently remained ignorant of whose life he had saved until a few months later when he received a letter from Colonel Adam Badeu, a friend of Booth’s, who Robert Lincoln had recounted the tale to. (Both Robert Lincoln and Badeu were members of General Ulysses S. Grant’s staff at the time.)

After the assassination, Edwin Booth saw his famed family name ruined; lost his brother; lost his President, whom he staunchly supported; and nearly lost his career, due to his association with his brother- all in one day, and with none of it due to anything he had done.   It was reported by his friends that he was brought stricken to the ground and only with time and the aid of his friends taking turns keeping a close watch on him in the coming months did he begin to make a recovery. He eventually made a successful return to the stage in January of 1866, about 8 months after the assassination.  It was acknowledged that the knowledge that Edwin had saved the President’s eldest son’s life gave him some comfort going forward with his life.