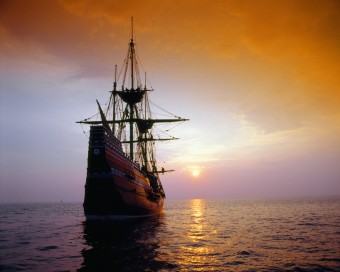 On this day in history, 1620, the Mayflower set sail from Plymouth, England heading for the New World with 102 souls aboard- some religious dissenters, many others adventurous entrepreneurs.

The colonists, who were headed for Virginia, had been given official authorization to settle there by royal authority. As fate would have it, rough seas and storms coupled with navigational mistakes led the Mayflower about 500 miles off course.

After an arduous 66-day voyage, on November 21st, the colonists landed at the tip of Cape Cod at Provincetown, Massachusetts. After dropping anchor in Provincetown Harbor, Captain Myles Standish and a group of men set out to explore the lay of the land and to find a suitable area to build a settlement.

During their absence, Susanna White gave birth to a son, Peregrine, who was the first English child born in New England. (Susanna would soon become the only surviving widow in the colony when her husband, William White, died the first winter.)

William wasn’t the only casualty. During the first year, over half of the settlers lost their lives to illness, but by 1621, things for the colonists was looking up after a bountiful harvest in the following autumn.

The economy steadily grew, attracting more colonists to the area, and by the 1640s Plymouth boasted a population of roughly 3,000 people. But by that time, Massachusetts had an even larger settlement – the Massachusetts Bay Colony to the north. The New World, and New England, had only just begun its long march into history.