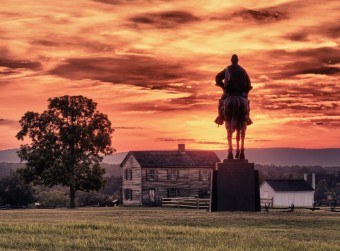 The Civil War ended 148 years ago this past month (April 9th, 1865) with the surrender of the Confederate forces at the Appomattox Court House in Northern Virginia.  54 years ago, in December 1959, the last reported surviving veteran of the Civil War, Walter Washington Williams, passed away in Houston, Texas at the reported age of 117.  President Dwight Eisenhower declared it a national day of mourning and gave him an honorary rank. Congress recognized his passing on the floor. Reporters, writers, and well-wishers all came to Houston to pay respects to the man who was America’s last direct living link to the war that divided the United States for a time.  Unfortunately, this all may have been a lie.

According to the  official history, Walter Williams was born 1842 in Itawamba County, Mississippi and served under General John Bell Hood beginning in 1864. He was a forgemaster, meaning he was in charge of finding food and figuring out how to go about transporting it.  After the war, in 1870, he moved to Texas where he settled on a 20 acre farm in Eaton (East Texas – about 100 miles from Austin). That’s where he remained, mostly unknown, until the late 1940s immediately following World War II, when reporters and historians began to seek out these last remaining survivors of the Civil War.

Williams became a local celebrity. He was invited to fancy dinners, given special awards, and called by honorary titles like “Trooper Williams”, “Honorable Colonel”, and even “Five Star General Walter Washington Williams.” When interviewed by the Dallas Morning News about how he had managed to live to such an old age, Walter responded:

I never et much. I get up for breakfast, turn around for dinner, and go to bed for supper. When I was riding up the Chisholm Trail the range cooks sort of held it against me because I was a light-eating man. I’ve always drunk lots of coffee, chewed plenty of tobacco, and haven’t tried to avoid any of this good Texas weather.

On September 4, 1959, months before Williams’ death and as his hometown of Houston geared up for Mr. Williams’ 117th birthday party, a reporter for Scripps-Howard by the name of Lowell Bridwell wrote a damaging exposé potentially debunking the “Walter Washington Williams myth.”  In it he called Williams “an enfeebled old man” who was a “Confederate veteran only in his memory-clouded mind.”  Bidwell had done some digging and found not “a single scrap” of evidence that Williams even served in the military, much less being the very old age of 117, like he claimed.

According to the 1860 census, Williams was listed as five years old, meaning he was born in 1854 and would have been only nine years old in 1864, seemingly too young to have fought in the Civil War. Moreover, according to Bridwell’s reporting, the National Archives does not list a Walter W., a Walter G., or even a Walter L. Williams from Texas or Mississippi as ever having served in the Confederate Army.  Newspapers across the country picked up on the Bridwell story and began printing their own stories with headlines like this one from the The Daytona Beach Journal,  “Walter Williams: Last Civil War Veteran or Hazy Memory?”

Defenders of Walter claimed that records from that time had a reputation for being spotty. During the last year of the war, with the Confederate army losing and in sad shape, they didn’t keep particularly meticulous records of who was serving within their ranks and even the records that did exist often had errors, such as incorrect birth dates. In addition, an archive in Jackson, Mississippi lists a “Walter W. Williams” as a Private in Company O, 5th Mississippi Cavalry.

Despite the controversy, when Walter Williams Washington passed away in December 1959, he was hailed across the nation as the last surviving veteran of the Civil War. He was laid to rest at Mount Pleasant Church cemetery in Robertson County (near Eaton), Texas. His grave is now marked by an interpretive sign, placed there by the Texas Civil War Centennial Commission in 1963. On the sign, it reads:

Reputed to have been the last surviving soldier of the Civil War…he had lived very quietly until in extreme old age he gained fame as one of the very few remaining veterans. After the nation lost all other men who had fought in the Civil War, he was given honorary rank of General by President Dwight D. Eisenhower. When Gen. Williams died in Houston at home of a daughter, President Eisenhower proclaimed a period of national mourning.

So was Williams really the last?  It’s somewhat unclear, though most historians today think probably not for the above reasons.  If he wasn’t the last, that honor goes to Albert Woolson, who passed away three years before Williams in 1956 and is considered within the academic community to be the last authenticated survivor of the Civil War.  Woolson was a Union drummer boy from Minnesota who enlisted in 1864 after his father passed away from a severe leg wound while also fighting for the Union.