“The [American Civil] War Began in My Front Yard and Ended in My Parlor.” 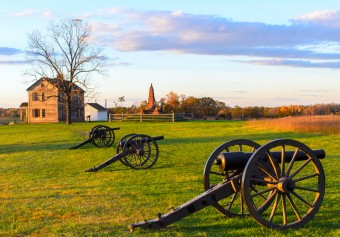 “The war began in my front yard and ended in my parlor.” This statement about the start and the end of the U.S. Civil War was spoken by Wilmer McLean and is surprisingly almost perfectly true.

A little background- Wilmer McLean was born on May 3, 1814 in Alexandria, Virginia, one of fourteen children.  When his parents passed away at an early age, McLean was raised by various family members. At 39, McLean married a widow by the name of Virginia Mason, who had two daughters from a previous marriage. Mason also inherited her family’s 1,200 acre Yorkshire plantation located in Bull Run, Virginia.

Life was peaceful at the Yorkshire plantation with McLean working as a fairly successful wholesale grocer. As tensions mounted between the North and South, McLean, a retired military man (former member of the Virginia militia with the rank of Major) and current slave owner, offered to let his plantation be used by the Confederate army and it was soon put into service as the headquarters for General P.G.T. Beauregard of the Confederacy.

McLean welcomed General P.G.T. Beauregard to stay at his house on July 17, 1861. The next night, July 18, 1861, General Beauregard was sitting at McLean’s dining room table when a cannonball exploded through the fireplace and into the kitchen. General Beauregard wrote about the event in his diary, “A comical effect of this artillery fight (which added a few casualties to both lists) was the destruction of the dinner of myself and staff by a Federal shell that fell into the fireplace of my headquarters at the McLean House.”

During the Battle of Bull Run, the Union soldiers were initially able to push back the Confederate troops, despite the impressive efforts of Confederate Colonel Thomas Jackson- Jackson earned his nickname “Stonewall”, for holding the high ground at Henry House Hill (shown in the background of the picture above). In the afternoon, Confederate reinforcements arrived and were able to break through the Union lines. The Union troops were forced to retreat all the way back to Washington D.C. Their retreat was a slow one, as it was delayed by onlookers from Washington who wanted to watch the battle unfold.

After the First Battle of Bull Run, the McLean household was used as a Confederate hospital and a place to hold captured Union soldiers. The Confederate army paid rent to the McLean family during their stay, a total of $825 (about $21,000 today) over the course of the war. McLean also made a small fortune running sugar and other supplies through the Union blockade to the Confederacy.

McLean started to fear for the safety of his growing family when the Second Battle of Bull Run started in 1862. His house and land were in disarray from the war, so he decided to make a fresh start in southern Virginia. After scouring the area, McLean found a nice two story cottage in Appomattox, Virginia about 120 miles south of his home in Bull Run. Here he hoped to stay away from the war and all of the problems it had caused for his family.

The McLean family enjoyed a few years of peace and quiet in this way, but in 1865 McLean found the Civil War at his front steps once again with the Battle of Appomattox Court House started on the morning of April 9, 1865.

Prior to this battle, General Robert E. Lee was forced to abandon the Confederate state capital of Richmond, Virginia after the Siege of Petersburg. Heading west, Lee hoped he would be able to connect with Confederate troops in North Carolina. The Union troops pursued Lee and his forces until they were able to cut off the Confederate retreat. Lee then made his final stand at Appomattox Court House and was forced to surrender as his troops were overwhelmingly outnumbered, four to one.

A messenger sent to McLean informed him of the Confederates intentions to surrender and asked him to find a location where the surrender could take place. On the afternoon of April 9, Palm Sunday, General Robert E. Lee met with Lieutenant General Ulysses S. Grant in McLean’s parlor to officially surrender. The terms of the surrender were generous to Lee and his army: none of his soldiers were to be held for treason or imprisoned; his men could take their horses home for spring planting; and the starving Confederate troops received food rations.

While this time around McLean’s house didn’t get partially blown up, after the Confederates surrendered, Union soldiers started taking tables, chairs, and any other household items from McLean as souvenirs to remember this historic event. A few soldiers gave McLean money as he protested the theft of his household items. For instance, the table that General Lee signed the surrender document on was purchased by General Edward Ord for $40 (about$1000 today).

In the days that followed the surrender, the McLean house was used as the headquarters for Major General John Gibbon of the United States Army. It was also at this time that local civilians started visiting the house… and taking any part of the home that they could get their hands on.  McLean did manage to continue to make some money off of this for a time, selling many items supposedly in the house during the signing; he reportedly sold enough items in this way “to furnish an entire apartment complex”.