The Great Chicago Fire Wasn’t Started by a Cow 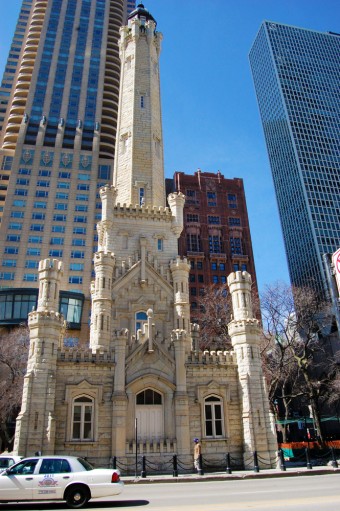 The Chicago Water Tower, one of the only public buildings in the burn area to survive the fire.

Myth: The Great Chicago Fire was started by a cow.

The Great Chicago Fire destroyed 3.3 square miles of Chicago, Illinois, burning for two days in 1871—between October 8th and October 10th. It killed hundreds of people, left more than 100,000 homeless (nearly one third of Chicago’s residents at the time), destroyed roughly 17,000 buildings, and caused a couple hundred million of dollars in damage (about $4-$5 billion today).

A popular story often told about how of the Great Chicago Fire started is that a cow owned by Kate O’Leary kicked a lit lantern over and that started the flames. The story has even been the subject of a children’s song:

Late one night, when we were all in bed,
Mrs. O’Leary lit a lantern in the shed.
Her cow kicked it over,
Then winked her eye and said,
“There’ll be a hot time in the
old town tonight!”

It may come as a disappoint to some to learn that the cow story isn’t true—the man who wrote the O’Leary story for the Chicago Republican, Michael Ahern, later admitted that he had made the cow angle up in order to create a more interesting tale. But the fire certainly did start in the vicinity of a barn owned by the O’Learys. However, the exact cause of the fire was never determined, though Catherine O’Leary was used as a scapegoat of sorts.  O’Leary was an Irish Catholic immigrant—despised by many people at the time—so she made an easy target. In addition to Ahern’s retraction of his cow story, the O’Learys claimed to have been asleep by the time the fire started, so there would have been no lantern in the barn for a cow to kick.

There has been a lot of speculation about the cause of the fire, but, as stated, little is known for certain. One of the other popular theories that is also likely false is that the fire was caused by a meteor shower- specifically, the theory goes that it was caused by fragments from the broken up Beila’s Comet. (Incidentally, about a year later, on November 27, 1872, fragments from Beila’s Comet resulted in a meteor shower that had an astounding 3,000 meteors per hour visible!) Three other large fires started around Lake Michigan on the same day, which some people argue is too much of a coincidence not to have a common cause. However, meteorites that actually make it to the ground are usually cool when they hit and thus generally don’t start fires. (One did once strike a woman while she was napping in her living room making her the first known person to be struck by an extraterrestrial object, but it wasn’t hot.)  Further, given the prevalence of flames at night and the extremely dry and windy conditions at the time, it’s thought by most historians that the other fires were merely coincidence and not from a common source like a meteor shower.

Despite not knowing the exact cause of the Chicago fire, it is easy to see just how the fire spread once it started. Chicago in 1871 was not like the skyscrapers-and-concrete Chicago that we know today. Around two-thirds of the buildings in Chicago were made of wood at the time. Most of the buildings had tar or shingle roofs, which would only serve to feed the flames. The roads and sidewalks were also made from wood products. The conditions were dry, with a drought plaguing the city not long before the fire started—that summer, they received only about a quarter of their average rainfall. And let’s not forget Chicago’s nickname: it isn’t called “the Windy City” for nothing. At the time, it’s believed that a strong south-westerly wind blew hot embers from the fire toward the heart of the city, landing on the highly flammable roofs and starting up additional fires.

Another big issue was that the people did not act quickly enough. The fire department was alerted to the growing problem around forty minutes after the fire started, after an alarm was pulled in a pharmacy. People didn’t realize how fast the fire would spread due to the bad conditions.

The fire finally went out when the winds died down and a light drizzle helped the fire fighters with their efforts. Only three large buildings in the affected area survived enough to be repaired: the Chicago Water Tower, St. Michael’s Church, and the Chicago Avenue Pumping Station. The latter two only had their exterior walls to rebuild from, as their insides were eaten away by the fire. In the aftermath, Chicago received donations of money, food, clothing, and other supplies from cities across the United States to help them rebuild. Surprisingly, much of Chicago’s infrastructure—such as mass transportation—remained intact. The fire had destroyed nearly 73 miles of road, but it hadn’t touched the harbors. Railroad tracks were also largely undamaged, which allowed so many of the donated goods to pour in.

After the fire, legislation was passed requiring buildings to be constructed from brick, stone, and other fireproof materials. It wasn’t fully effective because most of the poorer residents couldn’t afford the materials or the skilled labourers required to rebuild. In addition, some businesses simply ignored the laws to save money.

Ironically, it was Chicago’s fiery destruction which led to it becoming one of the United States’ most important economic cities, as well as one of the most populous. The rebuilding effort required an army of people to be hired as labourers, which boosted both the economy and population of the city. At the time of the fire in 1871, Chicago boasted about 300,000 residents. By 1890, Chicago was home to over a million people, making it second in population only to New York City.