Why and How a Cat Purrs 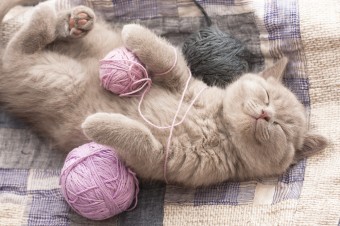 As any cat owner—or even someone who’s seen a cat—knows, cats often purr when they’re being petted or getting their chin scratched. They also purr when they want food and when they’re eating. Sometimes, they’ll purr as they drift off into sleep. Purring is most known to be a sign that cats feel comfortable, safe, and content.

However, cats also purr at other times: mother cats purr when feeding their young, and it is likely that purring is one way of communicating with their kittens. Nursing kittens will purr as well—it is thought that the purr may have developed at such a young age so that kittens would have another audible way to communicate with their mothers, letting them know that everything was fine, and for the mothers to comfort their kittens.

Something slightly less well known is that cats will also purr when they are in pain or in stressful situations, not just happy ones. Going to the vet is a good example: the cat has been taken out of its comfort zone, gone for a bumpy ride in the car, and is now being poked and prodded by someone in a white coat. Still, he’s purring—even though he isn’t at all content. Some vets have suggested that it could be the cat’s way of attempting to comfort himself, like a human feigning a smile when he’s nervous, but this is just speculation.

To answer your “how cats purr” question, to purr, a cat’s brain will send a signal to their laryngeal (or voice box) and diaphragmatic muscles. The laryngeal muscles then twitch, restricting airflow before relaxing to let air through again. The twitches occur at 25 to 150 vibrations per second and cause a brief separation of the vocal chords, which allows purring to occur during both inhalation and exhalation. Each cat has a consistent pattern, but if you’ve been around many cats you probably noticed that every cat has a slightly different purr. Purrs can vary in their sound and volume and they are technically considered a “muscular tremor” rather than an actual vocalization.

As to the “why” question-mostly for communication. Many cat owners will be familiar with purrs becoming less cute and more annoying. Many cats develop a way of purring that feels “insistent” or “obnoxious” to the human ear, with some scientists relating it to the cry of a newborn baby. This is called called a solicitation purr. They add a vocalization—a cry or meow—into the purr in order to solicit a response from their human carers, basically telling us “I need something!” It taps into the human need to nurture something in distress—or, if you’re a bit less empathetic, just stop the crying.

There is also another surprising reason.  As mentioned, cats will also expend energy purring when they are sick, injured, or in some sort of pain. The interesting thing about this is that there have been many studies done on the apparent “healing powers” of purring, and it’s believed that the frequency of the cat’s purr may act as a type of physical therapy on the cat.  Specifically, studies have shown that a cat purring can aid in increased bone density and healing muscles. The same frequency treatment is sometimes used in humans to speed up the healing of certain types of wounds and has been proposed as a way to help humans maintain bone density and muscle mass while in space.  In the same way, it is thought that cats purring may help them maintain bone density despite spending the majority of their lives either sleeping or in a resting state (often seeming to be asleep).

Potential healing powers aside, purring is mostly just a nonverbal way for a cat to communicate with other cats and people. They purr in order to bring attention to their needs and desires, or, if they’re anything like my new kitten, simply to let their humans know that they exist… at all times. In the end, though, all cats are different and will purr for different reasons, just like humans will laugh for different reasons or get nervous about different things. (As an interesting aside, studies have shown that, contrary to popular belief, most of the time people laugh, it’s not because we think something’s funny.  Rather, we generally laugh in non-humor related social interactions, with the laughter functioning as social feedback.)