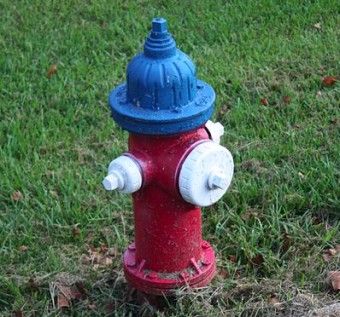 One of the first challenges that firefighters face when they arrive at a fire is finding a suitable water source that provides enough water for the type of fire they are fighting. Common sense tells us a car on fire will require much less water than a burning apartment building. There are formulas used by firefighters that will tell them approximately how much water is needed to fight a given fire (see bonus facts below).  Fire hydrants are commonly color coded to indicate how much water a particular hydrant will provide.  This allows for quick decision making when they are deciding which hydrant to access.

Water supply for firefighting is rated in gallons per minute (GPM) available. In most urban and suburban areas, water supply is from a far away source such as a reservoir or lake. This water is pumped through a system of above ground and underground pipes, then supplied to all of the buildings and homes in a given area. Every water system is maintained by the water district supplying the water. Most is used for everyday purposes like drinking water, bathing, doing your laundry, and watering your lawn. When there is a fire, water districts are required to allow firefighters to access this water for firefighting purposes. They do this with the commonly known fire hydrant. Due to the numerous different supply systems throughout the United States, there can be a wide range of available supply, from 500 GPM or less to over 2500 GPM.

In an effort to make it easier for firefighters to know what a specific hydrant will supply, the National Fire Protection Agency (NFPA) recommends that fire departments and water districts follow a set standard of color-coding. Known as NFPA 291, it says fire hydrants using public water supply systems should be painted chrome yellow, and their tops and caps should indicate the available GPM. Below 500GPM should be red, 500-999 GPM should be orange, 1000-1499 GPM should be green, and 1500 GPM or more should be blue.

If the hydrant is not hooked to a public water system, but instead is accessing a private system (as in the case of a shared well by several houses in a specific neighborhood) the hydrant should be painted a color distinguishing it from a publicly supplied system. NFPA recommends red.

OSHA (occupational safety and health administration) further recommends that a hydrant be painted violet for any source that is non-potable (so what color should we paint a hydrant that is non-potable and from a private source  OSHA?…. sketchy!). Furthermore, if a hydrant is inoperable, it’s recommended that it be painted black. If it’s only going to be inoperable for a short time, it’s common to just place a black bag over the hydrant.

GPM is only one of two factors of water supply. The other is pressure, rated in PSI (pounds per square inch). All hydrants are assumed to provide at least 20 psi. If it doesn’t, NFPA recommends that the rated pressure be stenciled on the top of the hydrant and on the caps. They also recommend this for extremely high pressured hydrants. Too much pressure can cause damage to the fire equipment if precautions aren’t taken.

The NFPA sets these standards and most fire departments and water companies try to follow them. In the end however, these are just guidelines and not necessarily requirements. As such, not every area will follow these recommendations. In 2005, Firehouse.com conducted a poll of firefighters and other fire service personnel asking if their departments use this color-coding system- 47% did and 44% did not. 8% of respondents did not have hydrants in their areas.  In cases where there are no hydrants, water supply trucks, known as tenders, will fill up with water from near-by sources, such as lakes and rivers, and bring it to the fire.

The NFPA recommendation is not the only color-coding system used. Many different municipalities create their own, for their specific situation. For instance, the Moraga-Orinda (CA) Fire District has taken to color-coding the tops of the hydrants following NFPA recommendations. They then color code the caps for the specific PSI provided. They also mark for “dead end” hydrants, hydrants only supplied from one direction. They have their own hydrant body color system, and an arrow system indicating higher pressure hydrants. They also provide Roman-numeral markings that indicate where the shut off valves are for that particular hydrant.

So when you are driving around your neighborhood and see a hydrant painted a specific color, be assured that color has a purpose. If you are one that has a hydrant on your property, it is not at all uncommon to try and hide this “eye-sore” by decorating it with flowers, butterfly’s, and all manner of interesting artistry. If you do, don’t be surprised if you get a knock on your door from the local water district or fire department telling you your amateur art is not appreciated!