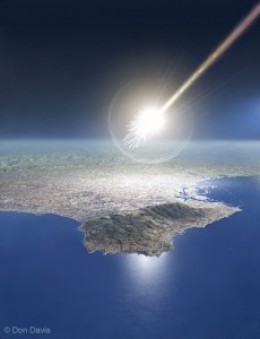 Today I found out about the Tunguska Event, which was a 1908 explosion estimated to have been nearly 1000 times more powerful than the atomic bomb dropped on Hiroshima in 1945 and about 1/3 as powerful as the largest ever detonated atomic bomb, the Tsar Bomba.

The Tunguska event occurred around 7:00 a.m. local time on June 30, 1908 near the Podkamennaya Tunguska River in Siberia.  Witnesses saw a “blue-ish light, nearly as bright as the Sun, moving across the sky.”  What followed was an estimated 15 megaton explosion which knocked over about 80 million trees in about a 1300 square mile area, forming a butterfly shape pattern.  This also sent a shock wave throughout parts of Europe and Asia, registering as far away as England (about 4000 miles away).  Further, the atmospheric pressure change was also significant enough to be measured all the way in Great Britain. Another interesting side effect of this blast was that, for several days after the blast throughout most of Asia and Europe, the night sky glowed.  It was so bright that people as far away as China reportedly were able to read in the middle of the night by nothing but the glow of the sky.

For a firsthand account, here is the testimony of one S. Semenov, who was about 40 miles from ground zero:

“At breakfast time I was sitting by the house at Vanavara Trading Post (65 km from the epicenter), facing north… I suddenly saw that directly to the north, over Onkoul’s Tunguska Road, the sky split in two and fire appeared high and wide over the forest. The split in the sky grew larger, and the entire northern side was covered with fire. At that moment, I became so hot that I couldn’t bear it, as if my shirt was on fire; from the northern side, where the fire was, came strong heat. I wanted to tear off my shirt and throw it down, but then the sky shut closed, and a strong thump sounded, and I was thrown a few meters. I lost my senses for a moment, but then my wife ran out and led me to the house. After that such noise came, as if rocks were falling or cannons were firing, the earth shook, and when I was on the ground, I pressed my head down, fearing rocks would smash it. When the sky opened up, hot wind raced between the houses, like from cannons, which left traces in the ground like pathways, and it damaged some crops. Later we saw that many windows were shattered, and in the barn a part of the iron lock snapped.”

So what caused this massive blast?  For a long time, it wasn’t precisely known.  When the event first happened, it drew little interest largely because it happened in a very remote part of the world.  It wasn’t until some 19 years later that Leonid Kulik, a Russian mineralogist, decided to go investigate, figuring that a massive meteorite must have hit the Earth.

Kulik and his team had little trouble locating ground zero of the blast, despite it being 19 years later, due to the fact that the “trees acted as markers, pointing directly away from the blast’s epicenter”.  However, once they got to the epicenter, they found a curious thing.  There was no crater, as they had expected, and the trees were still standing in about a 3 mile radius circle at the center, but with their limbs, bark, leaves, etc. all completely stripped.  So essentially, all these trees were just giant poles in the ground with all the other trees for miles and miles around blasted to the ground.

For a long time, there was much debate over exactly what caused this, but today scientists are reasonably certain it was a comet, rather than an asteroid (see the difference between a comet and an asteroid) or other naturally occurring event.  The comet must have been around 30-40 meters across (around 120 feet) and must have been traveling around 30,000-40,000 mph (about 55,000-65,000 km/h).  As it traveled through the atmosphere, the air around it heated up to as much as 50,000 degrees Fahrenheit (about 28,000 degrees Celsius) causing the comet to look like a giant fireball streaking through the sky.  Eventually, this also caused the comet to annihilate itself around 5 miles (8 km) above the Earth’s surface in a fiery blast that consumed the comet, which was largely made of ice.  Thus, you get a massive explosion, but no impact crater or much of any apparent evidence of what caused the explosion, unless you witness it or start taking very careful soil samples and the like.