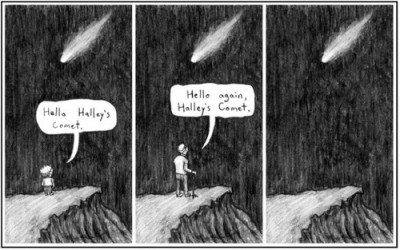 Today I found out the difference between an asteroid and a comet.

The tail of a comet is made from the Sun heating various substances in the comet, such as water in the form of ice, to beyond the boiling point level in the vacuum of space.  These vaporized substances are then ejected from the comet and carried off by solar winds, creating the tail.  This is why the tail of a comet always points away from the Sun, relative to the position of the comet, and not, as often depicted, directly behind the comet relative to its vector through space.

These tails gave rise to the notion that comets were made mostly of ice surrounding some relatively small core with various particles embedded in the ice.  Asteroids, on the other hand, are typically considered to be made up primarily of metals and various types of rocks that formed close enough to the Sun that most of the ice or other such relatively easily vaporized materials have long since been expelled.  However, in just the last decade or so, it has been found that, in fact, this is not always the case and that the makeup of asteroids and comets is really not all that different, though the comets do typically have more ice, thanks to initially being formed beyond the “snow zone”.

To study this and other things, in 2001, NASA’s Deep Space 1 team discovered that the surface of the comet Borrelly was not made up of ice, but rather, was very hot and completely dry, with no visible water or ice, much like many asteroids.  Except, of course, the object was exhibiting a tail, so it was known that there had to be relatively easily vaporized matter in there somewhere.  So, the theory at this point was that the ice must be just below the surface or there was some sort of matter covering the layer of ice, essentially blocking the ice from being observable.

Further research in 2005 was done on the comet Tempel 1. In this case, they used a probe to blast a crater in this comet in order to have a look at the innards.  What they found was that the above theory was correct and the ice is concentrated below the surface.

From there, the distinction between a typical asteroid and a comet becomes murkier because some asteroids also are thought to contain significant amounts of water in the form of ice below their surface.  Further, recent discoveries have shown that comet dust very closely resembles asteroid dust in makeup, contrary to former theories, suggesting they are made of much the same things, excepting the probable larger quantities of ice still remaining on the comets.

So we once again come back to the main difference simply being that comets still have sufficient easily vaporizable material, principally water,  that when they get within the inner part of our solar system, some of the water in the form of ice melts and is expelled, giving them nice “tails”.  Eventually, all the water and other easily vaporized materials will all be ejected from the comet, which then becomes an asteroid.