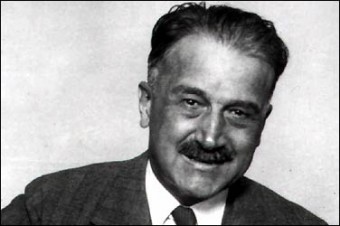 Today I found out about the real life “George Bailey” (It’s a Wonderful Life), who founded the Bank of Italy which became Bank of America.

The man was A.P. Giannini who was said to be who Capra modeled the character of George Bailey as well as the bank president in Capra’s 1932 movie, American Madness, after.  At the age of 14, Giannini left school and began working with his step father, Lorenzo Scatena, in the produce industry as a produce broker.  By the time he was 31, he was able to sell much of his interest in this company to his employees and had planned to retire.  However, one year later, he was asked to join the Columbus Savings & Loan Society, which was a small bank in North Beach, California.

Once he joined up, he found that almost nobody at the Savings & Loan, nor other banks, were willing to give loans to anyone but the rich or those owning businesses.  At first, Giannini attempted to convince the other directors at the Savings & Loan to start lending to working class citizens, to give them home and auto loans, among other things.  He felt that working class citizens, though lacking in assets to guarantee the loan against, were generally honest and would pay back their loans when they could.  Further, by loaning them money, it would allow working class citizens to better themselves in ways they would not have been able to do without the money lent to them, such as being able to buy a home or to start a new business.  He was never able to convince the other directors to begin lending to the working class.

Not to be dissuaded, he then set out to start his own bank.  With $150,000 raised from various friends and family, Giannini founded the Bank of Italy in 1904, which would be a bank specializing in loaning money to the common man.  The first Bank of Italy branch was in a converted saloon across the street from the Savings & Loan he had formerly been a member of.  The assistant teller at the Bank of Italy was the former bartender of that very saloon.

He then went about educating the working class on what a bank does and how one could help them.  He then made a practice of not offering loans based on how much money or equity a person had, but based primarily on how he judged their character.  Within a year, Bank of Italy had over $700,000 in deposits from these working class individuals, which is somewhere around $15-$20 million today. By the middle of the 1920s, it had become the third largest bank in the United States.

The Bank of Italy managed to be the only bank able to open back up directly after the earthquake, despite the fact that the bank building itself was unusable.  Directly after the earthquake happened in the very early hours of the morning, Giannini went and sifted through the rubble of his building and gathered $2 million into a garbage man’s wagon, owned by Giobatta Cepollina whose son would go on to work for Bank of America because of a promise made by Giannini to Cepollina in exchange for use of his wagon.  (Cepollina’s son was able to retire from Bank of American at 41.)

After gathering the money, Giannini then took it outside of town, covered in garbage to protect it.

Next, he headed out to the docks and setup a temporary bank with two barrels and a piece of wood as his desk.  He then began taking deposits and giving loans to help not only businesses, but also the working class, so that they’d have the money they needed to rebuild their homes and their lives.  At that time, none of the other banks had re-opened and most did not do so for several weeks, so few who kept their money in banks had access to it and many others had lost everything in fires.  Giannini also immediately sent two ships to Washington and Oregon to acquire large amounts of lumber to try to work around the inevitable materials shortage that he foresaw.  That lumber comprised most of the lumber available in the early stages of rebuilding San Francisco.

Because so many had lost everything, including identification papers, Giannini gave these people loans based on nothing but a signature and a handshake.  He supposedly never tired of mentioning to other bank big-wigs that wouldn’t loan to the common man that every single loan he made that way to so many working class individuals was ultimately repaid in full.

During his time with Bank of Italy and eventually Bank of America, as it became, he instituted a variety of practices that are standard among nearly all banks today.  He also was a key figure in making California what it is today, including: being an integral part of the California wine industry getting started; providing numerous loans to various entities in Hollywood in its early days, by starting the motion-picture loan division, which provided loans to many budding Hollywood groups and individuals including funding Walt Disney’s Snow White, when it had gone $2 million over budget; and funded the United Artists, which was founded by Charlie Chaplin, Douglas Fairbanks, and D.W. Griffith.

He also loaned money to the founders of HP, William Hewlett and David Packard, to start their business.  More significantly, he had his bank purchase the necessary bonds to fund the construction of the Golden Gate Bridge. And, of course, the aforementioned integral role in financing much of the rebuilding of San Francisco directly after the earthquake of 1906, among other things.

By 1930, Giannini had retired once again and this time moved to Europe.  However, his successor began running the bank like traditional banks of the day, only lending to the wealthy and businesses and the like.  Because of this, Giannini came back to the United States and rallied various employees and depositors to him, with them buying shares in the bank until they owned the controlling interest.  He eventually accumulated enough shares owned by working class citizens, who backed him, to allow him to regain control of the bank, at which point, he returned it to its former ways of lending to the “little man”.  He did not retire again.