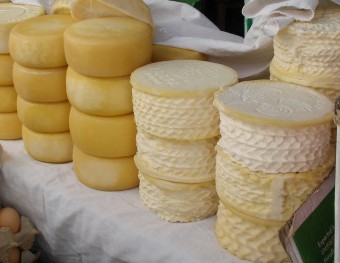 Myth: Mice love cheese and it makes a great bait for mouse traps.

In fact, as any pest exterminator or pet shop owner knows, mice don’t really like cheese at all and they’ll even actively shy away from certain types of cheese (they have a very sensitive sense of smell and certain cheeses give off odors that are repulsive to many types of mice).

According to Dr. David Holmes of Manchester Metropolitan University who recently did a study on whether mice liked cheese or not, while if hungry enough, mice will pretty much eat anything (even nibble on you, cardboard, whatever), most type of mice strongly prefer grains, fruits, and sweet things; certain types of mice will also eat insects and other small animals.  Basically, they like to eat what they’ve been accustomed to eating since before humans started making cheese around 10,000 years ago.

So how did the myth that mice liked cheese get started?  Nobody knows.  It’s been around for a long time, even being mentioned by philosopher Lucius Annaeus Seneca about 2000 years ago:

“Mouse” is a syllable.  Now a mouse eats its cheese; therefore, a syllable eats cheese…  Without a doubt, I must beware, or some day I shall be catching syllables in a mousetrap or, if I grow careless, a book may devour my cheese!  Unless, perhaps, the following syllogism is shrewder still: Mouse is a syllable.  Now a syllable does not eat cheese.  Therefore a mouse does not eat cheese. -From Seneca’s Letters – Book II Letter XLVIII

The leading theory as to the origin of the mouse/cheese myth, which isn’t based on any actual evidence, is that it probably had to do with people thousands of years ago mostly stocking grains, highly salted meats, and cheese as their food stuffs they kept on hand. The grains and meats were commonly stored in such a way as to keep vermin away.  On the other hand, cheese that needs to “breathe” perhaps was not so securely stored.  Inevitably, a mouse that is hungry enough will eat the cheese, leaving little teeth marks, leading people to think that mice seek out cheese.  But again, this theory is pure speculation and it seems odd that people who would actively protect grains and meats from vermin would start thinking from this that the vermin preferred the thing they weren’t as actively protecting.  So, needless to say, I personally find the next theory more plausible, though who knows really.

Dr. Holmes suggests that the myth may have arisen from some ancient legend or other as mice frequently popped up in various ancient mythologies.  He didn’t specifically offer any suggestions on what myth this may have been from.  But after a little digging, I found one potential connection, albeit a bit tenuous. White mice were often kept under the altars in Apollo’s temples in Ancient Greece.  Apollo himself was often referred to as “Apollo Smintheus”, meaning “Apollo the Mouse”. One of Apollo’s children, Aristaeus, in Ancient Greek mythology is credited with teaching mankind to make cheese, which he learned from the Myrtle-nymphs.  So perhaps the connection between mice and cheese stemmed from some sub-legend in there or some artists depiction of Apollo and Aristaeus, which included mice and cheese in the painting.  Again, nobody really knows, but it’s always fun to speculate.

As to why this myth has seemed to only grow stronger with time, Dr. Holmes notes ,

Cartoonists like to draw little segments of cheese with holes in them and little mice’ faces poking out of them.  They will admit this and they say quite simply it’s a really good image and it’s the kind of image we will continue to use, even though we know mice don’t like cheese.

So it’s possible even early artists included this imagery in paintings simply because it makes a “really good image”.

Whatever the origin, given that mice aren’t overly fond of cheese, it doesn’t exactly make the most effective bait in a mouse trap (and has a side hazard of accidentally injuring your cat, if you have one, given that many house cats love cheese!)

So if cheese isn’t an effective bait for mouse traps, what is?  Turns out, mice go crazy for peanut butter (aside: peanuts are not actually nuts).  They also like chocolate (the sweeter the better).  So one would think from this that Reese’s peanut butter cups might be good bait.  At the same time, it seems a shame to let such delicious goodness be wasted on mice (though depending on trap type, it may be their last meal, so you might as well give them a good little taste before the “snap!”  Or, you know… use humane traps you heartless gravy-eye’d bestially burking bogan.)

On the other hand, one person I know who keeps a couple mice as pets says that their favorite treat is Multi-Grain Cheerios dipped in peanut butter.  They go crazy for them. (Incidentally, she confirmed that unless she has forgotten to feed her mice for a while, they won’t go for cheese, something she learned early on as she had initially thought that they loved cheese and tried to feed it to them.)

Procter Rodent Control, on the other hand, besides recommending peanut butter for mouse traps, also states that “Maltesers” work phenomenally well. (For those not familiar, as I wasn’t, Maltesers are similar to Whoppers, basically malted milk balls surrounded by a thin layer of chocolate.)