Why Swiss Cheese Has Holes in It 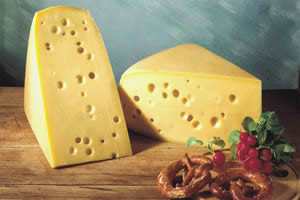 Today I found out why Swiss cheese has holes in it.

The holes come from a byproduct of some of the microbes added to milk to make Swiss cheese.  Specifically, there are three primary types of bacteria that are typically used to make Swiss cheese (these can vary slightly depending on the manufacturer): Streptococcus thermophilus; Lactobacillus helveticus; and Propionibacterium shermanii.

The first two types of microbes produce significant amounts of lactic acid, which is, in turn, consumed by the latter type of microbes, Propionibacterium shermanii.  It is this Propionibacterium shermanii that is responsible for the holes in Swiss cheese.  Through the process of consuming the lactic acid, the shermanii produces acetate, propionic acid, and carbon dioxide as a byproduct.

The acetate and propionic acid give the Swiss cheese much of its distinct flavor, while the carbon dioxide forms bubbles within the cheese block or wheel.  These carbon dioxide bubbles are left in as the cheese continues to ferment, rather than pressing them out, which gives Swiss cheese its distinctive holes.  Historically, however, these holes were seen as an imperfection in the cheese and most manufacturers would try to avoid them by pressing this type of cheese during the aging process, to force the bubbles out and keep the cheese solid throughout the block or wheel.

Interestingly, the size of the holes in Swiss cheese sold in the United States is regulated by the U.S. Government.  This is widely criticized by many Swiss cheese manufactures outside of the U.S., particularly in Switzerland, which tend to produce their cheese in a non-factory environment and thus, take more pride in the end product, rather then the bottom line. The reason for the protest is that the size of the holes is regulated by varying the curing time, acidity, and temperature, during the fermentation process, which typically lasts 60-100 days.  These changes, however, also will significantly affect the texture and flavor of the cheese itself.  Many foreign Swiss cheese manufactures claim that the regulations put forth by the American Government produce an inferior flavored Swiss cheese, hence the protest.

The U.S. Government created these regulations at the lobbying of commercial American Swiss cheese producers, who were having problems with their mechanical slicers cutting cheese when the Swiss cheese holes were too big, (typical sizes of the holes used to be around the size of a nickel). Rather than innovate or upgrade their equipment, they went with the age old practice of simply lobbying the government to make laws to fix their problem.  Namely, to specify that, in order for Swiss cheese to be classified as “Grade A”, which is generally necessary for high volume sales in the United States, it must have holes no bigger than 3/8 of an inch, which is about half the typical size before these new regulations were put in place.  This also significantly shortens the required aging time of North American style Swiss cheese, which also benefited the American mass-producers of the cheese.