Koalas Are Not a Type of Bear 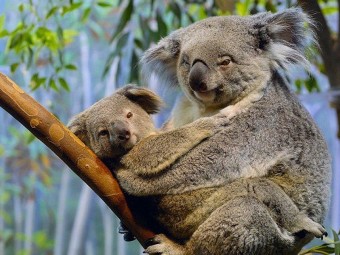 Koala “bears” aren’t a type of bear at all, as it turns out, and their non-scientific name doesn’t include “bear” on the end, as is commonly spoken outside of Australia by the English speaking world. They are simply “Koalas”.

So if they aren’t a member of the family Ursidae (bears), what are they? In fact, they are marsupials, along with kangaroos, wallabies, wombats, and possums, among others. Marsupials have the distinctive feature of a pouch, called a “marsupium”. Unlike most marsupials though, a female Koala’s pouch opens downward, rather than upward.

The name “Koala Bear” is thought to come from English speaking settlers around the 18th century.  They frequently would name new animals they saw based on what animal it looked like that they were familiar with. Around this same time, Koalas were also often referred to as “tree-bear”, “sloth”, “monkey-bear”, and other such names by these same settlers.

While Koala’s may look cuddly, they are anything but. Their fur is not soft and fluffy like it appears, but rather has more of the consistency of wool. So snuggling with a Koala would feel about like snuggling with sheep, only Koalas have long claws and incredibly strong grips. They also are very solitary animals, preferring to be by themselves most of the time, so make poor pets.

Another myth surrounding Koala’s is that they sleep most of the day because they are intoxicated by the eucalyptus leaves they eat. In fact, they simply have very slow metabolisms and it takes a long time for their bodies to process these leaves, which are normally poisonous to most animals. Also, given that they almost exclusively eat eucalyptus leaves, this tends to introduce very little caloric and nutritional value into their diet. As such, they have to sleep nearly 20 hours a day, conserving energy and allowing time for their bodies and the microbes in their digestive tract to process the eucalyptus leaves.