Both Cats and Dogs can See Color 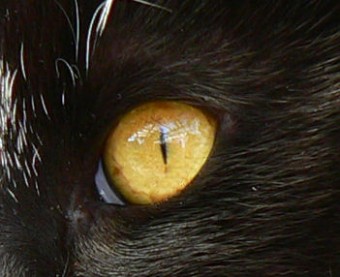 Myth: Cats and dogs can only see in black and white

The myth that cats and dogs are fully colorblind has been around for quite some time, despite the fact that it has been proven false for nearly half a century. Before this time, though, many thought that cats and dogs could only see in black and white.  This myth even seemed to be backed up by the results of properly executed scientific experiments.  For instance, in 1915 at the University of Colorado, two scientists were trying to determine whether cats could see colors and so devised an experiment like so: two jars, one wrapped with gray paper, one wrapped with colored paper, were placed before the cat.  If the cat touched the colored jar with its nose or paw or the like, it would get a tiny fish.  If it touched the gray jar, it got nothing. After 18 months and 100,000 tries, the cats tested only correctly picked the colored jar around half the time.  Given that the odds were 50/50 in the first place, it would seem from this that they couldn’t see color.  (Perhaps, though, they were just sick of fish after around 50,000 correct guesses between 9 cats, so about 10 little fish per day, per cat, every day, for 18 months.  So their picking the gray jar was really just a cry for help.  Alternatively, the cats were just screwing with the humans, because, you know… cats.) 😉

Given the large sample-size, this particular bit of research was accepted and for a time it was considered “fact” that cats were completely colorblind.  However, cats did have both cones and rods in their eyes, which seemed to fly in the face of the above research.  If they have both, why couldn’t cats see color?  Enter a more advanced scientific experiment:  using electrodes, neurologists wired up a cat’s brain and showed the cat various shades of color.  What they found was that the cat’s brain did respond and distinguished between many shades of color.  Hence, they could perceive color.

So what gives?  Why did the cats never learn that they could have all the fish they wanted if they just kept picking the colored jar?  Nobody really knows, but probably the “you can’t tell me what do to / you don’t own me / screw you, that’s why” theory is correct.  I mean, have you ever tried to get a cat to do what you wanted it to do?  I rest my case. 🙂

In any event, cats are partially colorblind in that they seem to lack the ability to see red, or at least not strongly, but have no problem with blues and greens.  So it’s possible that played a role in some of the experiments that seemed to demonstrate that cats couldn’t see colors.  After it was discovered that cats could distinguish colors, the “fish” style experiment was run again in the 1960s.  This time, it was a success.  However, cats never learn this trick very quickly.  On average, it took about 1550 tries before each cat would finally learn to pick the colored item to get their treat (presumably at this point they just got tired of the experiment, so started cooperating just to make it all stop).   The real leading theory as to why it took so long for cats to learn this is simply that color doesn’t really factor into the daily life of a cat, in terms of being important.  Thus, their brains, while able to distinguish between many colors, aren’t really used to doing so, so it takes a long time to train them to do a task like this.

This same type of experiment was run on dogs, with much more success (presumably because they long to please you, unlike cats who likely pick incorrectly out of spite).  Dogs do have significantly fewer cones than humans, though, so scientists estimate that they only see colors about 1/7th as vibrant as humans do.  Despite this, dogs were quickly able to learn to distinguish not only gray from various colors, but also to easily distinguish between many shades of colors.  Like cats, though, dogs are partially colorblind.  Specifically, due to lack of L-cones they have trouble with differentiating between red, orange, and chartreuse shades, though they can do things like distinguish red and blue and distinguish between the various shades of blue and the like.