Where the Words “Crayola” and “Crayon” Come From 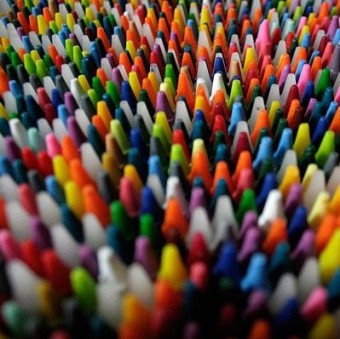 Today I found out where the words “Crayola” and “Crayon” come from.

The word “Crayola” was originally thought up by Alice Binney. Binney, a one-time school teacher, combined the French word “craie”, meaning “chalk”, with “ola”, shortened from the French word “oléagineux”, meaning “oily”.  Oléagineux derives from the Latin  “oleāginus”, which is the adjective form of “olea”, meaning more or less “olive tree”.

The French “craie” comes from the Latin “creta”, which also means “chalk”, and, in addition, can mean “clay”. Craie is also where “crayon” gets its leading “cray”, though the word “crayon” existed long before Crayola crayons were invented.  It first appeared around the 16th century in the French language and meant “chalk pencil” and later just shortened to “pencil”, as it still means today.

Alice Binney’s husband, Edwin Binney, along with his cousin, Harold Smith, founded Binney & Smith in 1885.  Binney & Smith originally produced various pigments, such as chemicals used to make tires black (which drastically increases the durability of the tires over natural rubber, which is white) as well as red iron oxide pigment used in the now classic red barn paint.

In the late 1890s and early 1900s, Binney & Smith began developing product lines for schools and children to use.  This began after they purchased a stone mill company and started making slate pencils for schools.  With that line of product performing well, they then focused on educational products targeting specific needs in classrooms of the day, likely getting ideas from suggestions from Alice Binney who was once a school teacher.

These products included the world’s first dustless chalk, called “chalk crayons”, for which they won a gold medal in the 1904 St. Louis World’s Fair, and, of course, the wax crayon sold under the “Crayola” brand beginning in 1903.

The wax Crayola crayon itself was simply a modified version of an industrial product Binney & Smith sold, typically used to mark crates and barrels.  This original industrial wax crayon, however, was not safe for children to use as it contained certain toxic chemicals to achieve the necessary colors.  They soon found ways to modify the ingredients to make them kid-safe, using non-toxic pigments, and began marketing these wax based crayons to children (with wrappers around the sticks) and to artists (without wrappers).