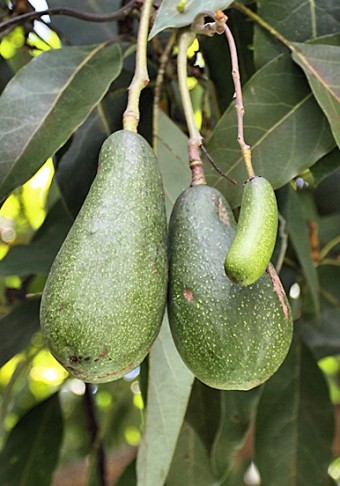 Today I found out that “Avocado” derives from a word meaning “testicle”.

The word Avocado comes from a Nahuatl Indian (Aztec) word “ahuácatl” meaning testicle. It is thought that the reference is either due to the avocado’s shape or the fact that it was considered to possess aphrodisiac qualities by the Aztecs. In Spanish, “ahuácatl” became “aguacate” and eventually “avogato” and then “avocado”. In English, the fruit was first described as an “Avagato pear” because of its pear-like shape. Later it also became known as an “alligator pear” given the alligator-like appearance to the skin. Over time, the term Avocado became the common word used to describe the fruit in English.

The word “guacamole” also derives from a Nahautl Indian word, namely “ahuacamolli”, which is compounded from “ahuácatl” and “molli”, the latter word meaning “sauce” or “soup”… testicle sauce?  Er… yum?