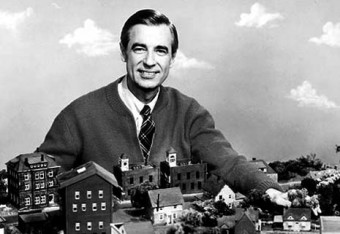 Today I found out Mr. Rogers was an ordained Presbyterian minister.

After Fred McFeely Rogers, better known as Mr. Rogers, graduated from college in 1951, receiving a B.A. in Music Composition, he began working in television, at first for NBC and later for WQED, which was a Pittsburgh public TV station that was the U.S.’s first community supported TV station.  While with WQED, working on The Children’s Corner, he used his off time to study theology at Pittsburgh Theological Seminary, as well as to take courses in child development.  By 1962, he received a Bachelor of Divinity degree and was ordained as a minister in the United Presbyterian Church and charged with continuing his work on creating and contributing to wholesome children’s television programs, which was his passion.

Originally after college, he had planned to go directly to seminary.  But upon seeing a television program for the first time “that had something horrible on it with people throwing pies at one another”, he decided to switch gears to try to work in the entertainment industry in order to try to help develop quality programs.   As Rogers stated, “I went into television because I hated it so, and I thought there was some way of using this fabulous instrument to be of nurture to those who would watch and listen.”

He got his first job as a gofer at NBC and worked his way up from there, working on such programs as NBC Opera Theater, the Gabby Hayes’ Show and as a floor director on The Kate Smith Hour and Your Lucky Strike Hit Parade.  He ultimately left NBC, however, because he felt their reliance on advertising and merchandizing was significantly undermining their ability to produce quality children’s programs that not only entertained, but also educated children, which was more or less his original goal in getting into TV in the first place.

From there, he went to the public station WQED working on Children’s  Corner, which, ironically enough, 30 segments of were later purchased and aired by NBC.  Nine years later, Mr. Rogers ended up working at CBC in Toronto, Canada developing a 15 minute children’s program called Misterogers, which was very similar to his later, much more famous show, Mister Rogers’ Neighborhood, even including some songs and characters that appeared in the latter program.

After three seasons, though, Mr. Rogers left CBC to move back to western Pennsylvania, with his wife and he feeling it was a better environment for their two sons.  Upon leaving, Mr. Rogers acquired the rights to Misterogers from CBC and began work on his new show Mister Rogers’ Neighborhood, which would at first be aired on the Eastern Educational Network and later nationwide in the newly created PBS.