April 16, 2013 Daven Hiskey
Kevin asks: Why do we call the stock market trends “bullish” and “bearish”? 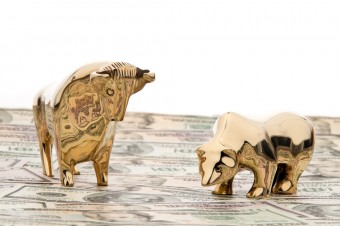 For those who don’t know, a “bear” market, or when someone is being “bearish” in this context, is marked by investors being very conservative and pessimistic, resulting in a declining market generally marked by the mass selling off of stock.  A “bull” market is simply the opposite of that, with investors being aggressive and positive, with stock prices rising as a result of this optimism.  This “bull” and “bear” terminology first popped up in the 18th century in England.

There are a couple different possible sources for the “bear” part of this tandem, but the leading theory is that it derived from an old 16th century proverb: “selling the bear’s skin before one has caught the bear” or alternatively, “Don’t sell the bear’s skin before you’ve killed him,” equivalent to, “Don’t count your eggs before they’re hatched.”

By the early 18th century, when people in the stock world would sell something they didn’t yet own (in hopes of turning a profit by eventually being able to buy the thing at a cheaper rate than they sold it, before delivery was due), this gave rise to the saying that they “sold the bearskin” and the people themselves were called “bearskin jobbers”.

One of the earliest references of this comes from an issue of The Tatler, April 26, 1709:

Forasmuch as it is very hard to keep land in repair without ready cash, I do, out of my personal estate, bestow the bear-skin, which I have frequently lent to several societies about this town, to supply their necessities;  I say, I give also the said bear-skin as an immediate fund to the said citizens forever…

I fear the word Bear is hardly to be understood among the polite people; but I take the meaning to be, that one who insures a real value upon an imaginary thing, is said to sell a Bear, and is the same thing as a promise among courtiers, or a vow between lovers…

Yet another early instance of the term is in Daniel Defoe’s The Anatomy of Change Alley, published in 1719, around the time the term was popularized to something of the same type of definition we use today:

Those who buy Exchange Alley Bargains are styled buyers of Bear-skins.

The use of the word “bear” in this way was popularized thanks to one of the early market bubbles known as the South Sea Bubble.  While it was a long and incredibly complex market scheme that led to the bubble, the gist of it was that the South Sea Company, formed in 1711, was granted by Britain a monopoly on all trade to South America and would be given an annual sum (6% interest plus expenses) from the government.  In exchange, the new company agreed to take over large portions of the government’s debt. (In fact, this was primarily how the company actually made money throughout its century and a half it was in business, simply by dealing in government debt.)

Thanks to this deal and an amazing amount of government corruption, insider trading, and other unscrupulous practices by certain shareholders who knew well that the company’s trade business had little hope of ever being profitable, the burgeoning company’s stock soared. At its peak, based on the stock price, the company was worth about £200 million (by purchasing power, today this would be about £24 billion or $37 billion; by average earnings, it would be £350 billion or $537 billion).

Besides the fact that they didn’t even have their first trading shipment until 1717, 6 years after the trading company first formed, one of the problems was that having an exclusive monopoly on trading to South America from the British government at the time wasn’t saying much as most of the region was almost entirely held by Spain, who Britain was at war with.  Nevertheless, amid rampant and widely published rumors (deftly planted by certain stock holders to jack up the price) of the vast wealth from gold and other resources in those regions and the potential promise of soon securing trade rights from Spain, the stock prices soared, even though the company itself wasn’t really doing any actual trading and their main asset, the monopoly on trade to Middle and South America, was essentially worthless, as the core stock holders knew well.

Spain did eventually grant the South Sea Company rights to trade in the regions held by Spain, but only one ship load per year total was allowed in exchange for a percentage of the profits.  Needless to say, the inability to do any actual real volume of trading and the fact that war once again broke out in 1718 between Spain and Britain causing much of the company’s scant physical assets to be seized by Spain, the market crash that followed wasn’t pretty.

As to the “bull” name for rising markets, in this case we have to do a little more speculation as the documented evidence just isn’t there. The leading theory is that it came about as a direct result of the term “bear”.  Specifically, the first known instance of the market term “bull” popped up in 1714, shortly after the “bear” term popped up.  At the time, it was something of a common practice to bear and bull-bait. Essentially, with bear baiting, they’d chain a bear (or bears) up in an arena, and then set some other animals to attack the bear(s) (usually dogs) as a form of entertainment for spectators seated in the arena.

While bears were one of the more popular animals to use in these games, bulls were also commonly used. More rarely, other animals were used such as in one instance where an ape was tied to a pony’s back and dogs were set on them.  According to one spectator, the spectacle of the dogs tearing the pony to shreds while the ape screamed and desperately tried to stay on the pony’s back, out of reach of the snapping jaws of the dogs, was “very laughable”…

In any event, the popularity of bear and bull baiting, along with perhaps the association with bulls charging, is thought to have probably been why “bull” was chosen as something of the antithesis of a “bear”, shortly after “bear” first popped up in the stock sense.  But, of course, we can’t be at all sure on this one as there wasn’t the more lengthy documented progression of definition as with the “bear”  term.