Does Hand and Foot Size Really Correlate with Penile Length?

May 25, 2017 Scott
Kelley M. asks: Is a guy’s hand or foot size actually a good indicator of the length of their penis or is that a myth? 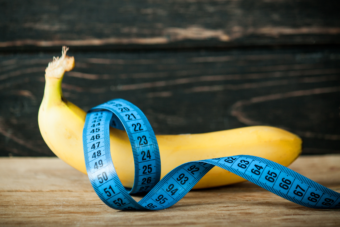 Given that public nudity is generally considered unacceptable in most of the modern world (and if you’re wondering, see: When Did Humans Start Wearing Clothes?), people have long tried to come up with other potential indicators to determine the size of a guy’s manhood without actually seeing it. A seemingly tried and true method for doing just this is to look at the size of the man’s hands and/or feet. But does hand and foot size really correlate to the length of the penis?

Studies have consistently shown that the size of a guy’s feet or the overall size of their hands is not related to their member’s erect measurement. However, a man’s fingers do give a strong clue as to their probable penis size- but the overall length of the fingers is not what’s important here.

For instance, a study published in the Asian Journal of Andrology in 2011 found that the ratio between the 2nd and 4th digits on the hands strongly correlates with the overall length of an individual’s penis. Specifically, Dr. Ho Choi and et al. state; 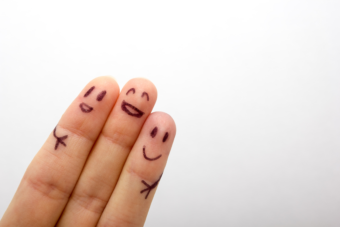 In a nutshell, the lower the ratio- how much shorter the index finger is than the ring finger- the longer the penis will probably be when erect. (And if you’re wondering, flaccid penis length is not an accurate predictor of erect penis length.)  More specifically, you can calculate your ratio by taking the length of your index finger (measured from the crease where it meets your hand, to the tip) and divide it by the length of your ring finger. The shorter your index finger is compared to the ring finger, the lower the ratio will be and, if you’re a man, the longer your penis probably is.

So why does the ratio of the index and ring finger lengths correlate to erect penis length? In the beginning, female and male genitals are pretty much the same. This is because they develop from the same cluster of tissues (gonads).  In males, somewhere around weeks 7-9 of gestation, the gonads begin secreting two hormones- Anti-müllerian hormone (AMH) and testosterone. AMH prevents the development of the ducts that eventually turn into the fallopian tubes, the uterus, and upper vagina.

Notable here, dihydrotestosterone attaches to androgen receptors on tissues that eventually develop and combine into the penis and scrotum. Low levels of this within the womb, or later during puberty, may result in an underdeveloped or malformed penis.

So what about fingers? Circulating testosterone in the womb will affect other body parts as well- pertinent to the topic at hand, including the ratio between the 2nd and 4th digits (index and ring fingers).

Why does testosterone affect digits differently? For that, I’ll have to get a little more technical, but essentially the activity mediated by androgen receptors, and estrogen receptor-a, is higher in your ring finger compared to your index finger. This is regulated by the structure of genes controlling the process for the bone growth of your fingers, called endochondral ossification. The spread of chondrocytes will determine the length of your finger, and this expansion is higher in the ring finger compared to the index finger.

Based on this physiology, it has been long known that you can predict prenatal hormone exposure based on the ratio of these two fingers. Since both penile length and the ratio of the ring and index finger is basically a result of the amount of testosterone and DHT circulating in utero, there is a correlation between that ratio and the length of a man’s favorite appendage.