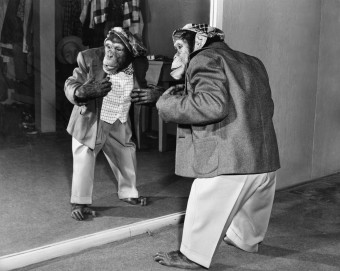 Determining exactly when humans began wearing clothes is a challenge, largely because early clothes would have been things like animal hides, which degrade rapidly. Therefore, there’s very little archaeological evidence that can be used to determine the date that clothing started being worn.

There have been several different theories based on what archaeologists have been able to find. For instance, based on genetic skin-coloration research, humans lost body hair around one million years ago—an ideal time to start wearing clothes for warmth. The first tools used to scrape hides date back to 780,000 years ago, but animal hides served other uses, such as providing shelter, and it’s thought that those tools were used to prepare hides for that, rather than clothing. Eyed needles started appearing around 40,000 years ago, but those tools point to more complex clothing, meaning clothes had probably already been around for a while.

All that being said, scientists have started gathering alternative data that might help solve the mystery of when we humans started covering our bits.

A recent University of Florida study concluded that humans started wearing clothes some 170,000 years ago, lining up with the end of the second-to-last ice age. How did they figure that date out? By studying the evolution of lice.

Scientists observed that clothing lice are, well, extremely well-adapted to clothing. They hypothesized that body lice must have evolved to live in clothing, which meant that they weren’t around before humans started wearing clothes. The study used DNA sequencing of lice to calculate when clothing lice started to genetically split from head lice.

The findings of the study are significant because they show that clothes appeared some 70,000 years before humans started to migrate north from Africa into cooler climates. The invention of clothing was probably one factor that made migration possible.

This timing also makes sense due to known climate factors in that era.  As Ian Gilligan, a lecturer at the Australian National University, said that the study gave “an unexpectedly early date for clothing, much earlier than the earliest solid archaeological evidence, but it makes sense. It means modern humans probably started wearing clothes on a regular basis to keep warm when they were first exposed to Ice Age conditions.”

As to when humans moved on from animal hides and into textiles, the first fabric is thought to have been an early ancestor of felt. From there, early humans took up weaving some 27,000 years ago, based on impressions of baskets and textiles on clay. Around 25,000 years ago, the first Venus figurines—little statues of women—appeared wearing a variety of different clothes that pointed to weaving technology being in place by this time.

From there, more recent ancient civilizations discovered many materials they could fashion into clothing. For instance, Ancient Egyptians produced linen around 5500 BC, while the Chinese likely started producing silk around 4000 B.C.

As for clothing for fashion, instead of just keeping warm, it is thought that this occurred relatively early on. The first example of dyed flax fibers were found in a cave in the Republic of Georgia and date back to 36,000 years ago. That being said, while they may have added colour, early clothes seem to have been much simpler than the clothing we wear today—mostly cloth draped over the shoulder and pinned at the waist.

Around the mid-1300s in certain regions of the world, with some technological advances in previous century, clothing fashion began to change drastically from what it was before. For instance, clothing started to be made to form fit the human body, with curved seams, laces, and buttons. Contrasting colours and fabrics also became popular in England. From this time, fashion in the West began to change at an alarming rate, largely based on aesthetics, whereas in other cultures fashion typically changed only with great political upheaval, meaning changes came more slowly in most other cultures.

The Industrial Revolution, of course, had a huge impact on the clothing industry. Clothes could now be made en mass in factories rather than just in the home and could be transported from factory to market in record time. As a result, clothes became drastically cheaper, leading to people having significantly larger wardrobes and contributing to the constant change in fashion that we still see today.