May 28, 2017 Karl Smallwood 5 comments
Joshua F. asks: Is it true that in the UK they have big power surges every time soap operas end because everyone makes a cup of tea at the same time? 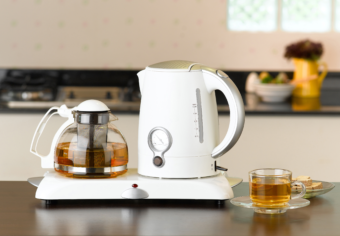 At first glance the idea of the UK being simultaneously addicted to both trashy soaps and tea to such an extent that the country’s national power grid experiences a massive surge of usage every time one ends seems like it must be a gross exaggeration stemming from a pair of stereotypes. As it turns out, though, this is not only a readily observable phenomenon in the UK, but it’s such a normal part of daily life for the National Grid operators that they have to keep track of what’s going on in the plot of upcoming popular soaps and other shows to help predict ratings. They also keep TVs in office to watch said shows so they can see precisely when a given episode ends. This is all necessary in order to keep the power grid fully operational during the very brief surges.

This phenomenon, officially dubbed TV Pickup by the engineers at the National Grid, is largely thanks to a unique combination of the UK Citizens’ long standing love affair with soap operas, the country’s enjoyment of a good cup of tea (and more recently instant coffee), and the almost universal adoption of electric kettles throughout the UK (a relatively power intensive device, typically using around 1,000-1,500 watts).

The result is that for about 3-5 minutes after the end of a popular show, there’s a rather large uptick in demand for electricity across the country. As you probably guessed, this is roughly the amount of time it takes to boil a full kettle of water in such an electric kettle.

The reason why these surges pose such a large problem is because, to quote an energy operations manager from the National Grid, Alan Smart:

The way to think about it is to imagine you are in your car and your challenge is to keep the car at exactly 50 miles an hour. You press on the accelerator as you go up the hill, and you ease off on the other side.  We can’t store electricity in any great quantity, so we have to forecast second by second, minute by minute.

In a nutshell, the system as it stands today has limited capacity to ramp up electricity generation fast enough to deal with large unpredicted surges and it’s quite expensive to dump off excess electricity from the grid if overproducing. For instance, even newer nuclear and coal plants can take hours to ramp up to full capacity and hours to ramp back down, with older plants even less nimble, sometimes taking more than a day for such a ramp up. Diesel and gas plants are much faster (and much more expensive), but still need several minutes to a half hour to ramp up.

So how do the engineers deal with the demand placed on the grid by as much as 1-2 million electric kettles being switched on at more or less the exact same time and only for a few minutes?

In short, as previously mentioned, the National Grid first starts by pre-planning, keeping track of what major sporting events are coming up as well as what’s going on in various shows and general time tables of when said popular shows will probably end; this is an extremely tricky thing with sporting events, but even for TV shows it’s a difficult proposition. While the BBC does give the National Grid the times when the shows are scheduled to end, these are rarely perfectly accurate- and perfect accuracy is what the grid operators need to prevent brownouts or overproduction of power.

With all this entertainment information, and using data from previous years, what they know of how weather affects power usage (and generation, with the UK projected to have 30,000 Megawatts of wind power alone by the early 2020s), etc., their energy forecasters come up with the estimated power demand throughout a given day, including potential spikes and lulls.

They then prioritize where they’ll be getting the needed power from in order of expense- cheapest power sources first for a given area of the grid. However, even with all this pre-planning, as previously mentioned, there is simply no way to ramp up the power fast enough for these TV Pickups using the normal base-line sources, unless they just wanted to expensively dump the excess created before and after the spike just to accommodate the 3-5 minute surge.

So how do they keep the kettles on at a relatively reasonable price? They maintain a series of power stations that are equipped with pumped storage reservoirs. These (essentially) hydroelectric “batteries” are capable of going from zero to peak production in under a minute. They do this by releasing massive amounts of water stored high up to power generators below.

For instance, Dinorwig Power Station in Wales has one of the fastest response times of any pumped storage facility in the world; they’re able to take the power output from nothing to maximum production- about 1800 MegaWatts- in roughly 16 seconds. If necessary, they can then sustain that for approximately six hours before the water runs out.

At night when usage is low and electricity is at its cheapest (remember, they prioritize energy production based on cost- so as demand dies, more expensive sources get turned off), the operators have the water pumped back up to the storage zone.

For long term generation this is relatively expensive electricity compared to many base-line sources. On top of that, these reservoirs are largely supposed to be reserved for major outages (and thus only used when strictly necessary otherwise). However, these stations also provide the engineers a great way to keep the grid seamlessly operational during brief spikes, like TV Pickups, where ramping up base-line sources just to service a few minutes would be a bit of an overkill, or in the case of an unexpected spike, an impossibility.

As for exact timing, engineers have small televisions tuned to the various TV channels so that they can note the exact moment popular shows end and use the seconds it will take viewers to walk to the kitchen to initiate production of the excess power that they expect they’ll need. You can see this in action in this clip from a BBC documentary, Britain from Above, where the engineer reacts to the ending theme of the soap, Eastenders, so that he can ensure the frequency of the grid remains as close to 50 Hertz as possible.

So how big are the TV Pickups? The largest TV induced spike occurred in 1990 directly after the semi-final World Cup match between England and Germany, which was watched by an estimated 25-26 million people in the UK. (For reference, at the time the country’s population was estimated to be about 57 million.) The match ended in a penalty shootout, meaning that almost half the country was watching a live event to the end, with that end’s timing being unpredictable.  Needless to say, the National Grid operators had their eyes glued to the match as well.

When it did end in a German victory, an estimated 1.2 million Britons headed to the kitchen to drown their sorrows in a cup of tea, to the tune of an almost instant demand of an additional 2,800 Megawatts of power from the National Grid. For reference here, the normal total demand on the entire grid during peak times that time of year is about 40,000 Megawatts. (And if you’re curious, “peak of peak” on the grid in the year is roughly 60,000 Megawatts. On the other end, in the night in the summer usage typically drops to closer to 20,000-25,000 Megawatts.)

Runner’s up for largest TV Pickups include directly following a January 22, 1984 airing of The Thorn Birds (2,600 Megawatts), the World Cup quarter-final between England and Brazil in 2002 (2,570 Megawatts), the end of the Royal Wedding of Prince William and Kate Middleton in 2011 (2,400 Megawatts), and the end of an episode of the popular soap Eastenders revealing which character shot another in 2001 (2,290 Megawatts).

Thankfully for the awesomely titled Energy Forecasters at the National Grid, the rise of streaming services like Netflix and BBC iPlayer among other on demand services, as well as increased usage of time-shifting recording devices, has resulted in a noticeable drop in the size of these TV Pickups.

It’s thought that the combination of more of such media being made available to consumers in this way will eventually put an end to this somewhat unique British phenomenon. However, the National Grid still reports that although popular shows no longer (usually) cause as large of a surge in demand as they once did (with reports from 2016 indicating that average spikes at the climax of shows today are about a third of what they were 15 years ago), the National Grid still regularly see spikes of 200-400 Megawatts after popular shows. And if a given episode is particularly hyped for whatever reason, such as season or series finales, the TV Pickup will generally be closer to 700-800 Megawatts. In either case, this is more than enough to cause power grid problems if they’re not addressed immediately by grid operators.

National Grid representatives also note that major sporting events and the like still have the power to pull the massive spikes of yore when they end and citizens head to the kitchen for a good cuppa.