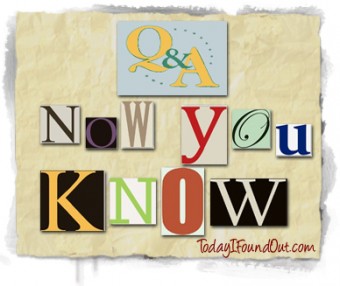 Well Amanda, the physical response causing a flaccid penis to become hard can be mediated by both physical stimulation (known as somatic) or autonomic (involuntary) processes like arousal from an attractive person, or a combination of both. We’ll first look at the anatomy behind the erection and then talk about how the brain affects that anatomy.

The penis, no matter how small or large, consists of skin that goes from the abdominal wall to the head of the penis, known as the glans. This skin envelopes the anatomy under it, and can be moved freely over it. The anatomy underneath consists of 3 spongy-like cylinders. Two cylinders, known as corpora cavernosa, reside on the top and sides. These two contain several spaces within them, called sinusoids, that fill with blood when the penis is erect. They are connected in a Swiss-cheese like fashion allowing blood to flow evenly through them. One cylinder, known as the corpus spongiosum, sits just below these two and contains the urethra (the tube where the pee and sperm come out). The three cylinders are separated by a tissue known as Buck’s fascia, and are surrounded by a tissue called the tunica albuginea. 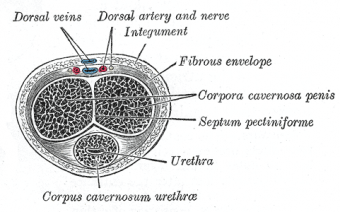 When the penis is flaccid, these three cylinders contain a small amount of blood, enough to keep the tissues supplied with adequate amounts of nutrition. This flaccid state is only contracted moderately. If you were to make the appendage cold, like when in a swimming pool, it can become severely contracted by shunting more blood away from the organ.

Once the brain releases specific neurotransmitters, an erection happens. Several events take place at approximately the same time. The first is relaxation of the smooth muscles within the two corpora cavernosa. Then the arteries and smaller arterioles within them dilate, becoming bigger, and increases the blood flow to the penis. The blood starts to become trapped by, and within, the expanding pockets of the corpora cavernosa. This constricts the veins against the surrounding tunica tissue, creating a situation similar to stepping on a garden hose. This decreases the amount of blood that can exit the penis and begins to increase the pressure within it, causing a mild erection (halfcocked if you will). When specific somatic nerves are stimulated (when you touch the erection), the muscles within the cavernosa also contract causing the erection to become full and hard.

The corpus spongiosum and the head of the penis also experience an increase in bloodflow, but since the tunica is thin over these areas, the veins don’t get compressed as much and allows more blood flow out- about 1/3 to ½ the pressure of the two corpora cavernosa.

What makes this protrusion of prepubescent fear happen? The penis reactions during erection and while flaccid are completely controlled by the central nervous system (CNS). The CNS can be affected by the two types of nervous systems I mentioned before. The involuntary (autonomic) nervous system and the somatic (voluntary). How the CNS uses signals from these nervous systems is a complex web of interconnecting reactions. For ease of understanding, I will touch on the two main types of reactions. Be aware, due to the extreme complexity of these processes, it would take a much longer article to do them justice. Just know, there are several ways the CNS affects the penis that I will not talk about for brevity’s sake.

When the penis is touched, the nerve that sends a signal to the brain to begin releasing neurotransmitters is the pudendal nerve. This nerve also travels to the back part of the scrotum and the rectal nerve. When a guy sees an attractive person, or imagine one, his involuntary nervous system, involving his sympathetic (fight or flight) nervous system and parasympathetic (feed and breed), begin to create the physical reactions inside his corpora cavernosa, via the cavernous nerves. Interestingly, this is one area of the body that can be affected both negatively or positively by both your parasympathetic and sympathetic nervous systems. I told you it was complicated 🙂

No matter the cause, be it touch or involuntary, when the CNS senses a reaction from either system, it releases several neurotransmitters that cause the relaxation of the smooth muscles around the corpora cavernosa and the process of erection begins! These neurotransmitters include nitric oxide, dopamine, acetylcholine, serotonin, and noradrenalin. Some peptides like oxytocin are also involved.

Due to the fact that there are several different types of systems and the numerous different neurotransmitters involved, an erection doesn’t necessarily have to happen just because a person is aroused. Guys can have nocturnal erections that happen while sleeping. Electrical stimulation can cause erections, there can also be reflexive erections that are caused by damage to the spinal cord, known as a priapism. Certain drugs that affect neurotransmitters can cause a lack of, or an increase in, erections. For guy’s out there, if you’ve ever gotten an erection at the dentist while inhaling nitric oxide, you know what I’m talking about! 🙂