Why Did Yankee Doodle Stick a Feather in His Cap and Call It Macaroni?

July 21, 2016 Matt Blitz
James H. asks: Curious question for you, but something I’ve always wondered about. Why did Yankee Doodle call the feather in his hat macaroni? 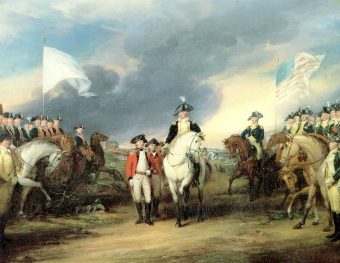 While silly and irreverent, the song “Yankee Doodle” holds a rather patriotic place in many American hearts and is even the official state song of Connecticut. Today, the jingle may bring to mind a proud revolutionary spirit, but the song’s origins are really anything but. The tune was originally used by British soldiers to mock Americans for being disorganized, disheveled and, as far as the Brits were concerned, inferior.  By the end of the American Revolution, however, the song had been repurposed by the burgeoning new country. Here now is the story behind the song “Yankee Doodle” and the answer to that elusive question – Why did Yankee Doodle stick a feather in his cap and call it macaroni?

As with a lot of older songs, the tune and music that we today associate with “Yankee Doodle” was actually written much earlier than the 18th century. The melody may have been heard as early as the 1500s in Holland, with rather nonsensical lyrics about the harvest and farmers receiving their wage in buttermilk.

Over the next two centuries, that particularly melody bounced around Europe and was re-appropriated for various other little jingles – like describing the struggles of English Puritans or used in nursery rhymes. (For instance, “Lucy Locket lost her pocket, Kitty Fisher found it, nothing in it, nothing in it, but the binding round it”- a rhyme that may or may not have been written before the tune started being used for Yankee Doodle). Another theory is the Hessians were the ones who originally brought the tune to the colonies from Germany, where it was being used in a drinking song. (Incidentally, the tune for the Star Spangled Banner was also originally used in a popular drinking song.)

Much like the origin of the melody, where the well-known lyrics came from is also not definitively known. One popular theory is that similar lyrics were first used to make fun of Oliver Cromwell, the 17th century English political and military leader, for fancying himself a fashionable person. The purported lyrics are sometimes said to have begun “Yankee doodle come to town, upon on a Kentish pony.” However, this seems unlikely considering the word “Yankee” didn’t come along until years after Cromwell, with the first known documented instance appearing in 1683- used by Dutch settlers in New Amsterdam (today’s New York) to disparage their English colonist neighbors in Connecticut.

Stemming from the Dutch “Janke” meaning “Little John,” “Yankee” was definitely intended as a belittling remark and became the European way to describe all American colonists, more or less being the equivalent of calling someone a “country bumpkin”, “redneck,” or “dumb hick” today. (Jaywalker is another term that originally has derogatory connotations- deriving from the insult “jay,” meaning more or less “dumb hillbilly.”)

The first known documented instance of the tune and the words “Yankee” and “doodle dandy” being put together in the same song, it seems, was around the 1750s during the French and Indian War. Prior to fighting for their independence against the British, the colonists were, of course, subjects of the English. Therefore, when the French and Brits went to war over territories in the New World in 1753, the colonists were recruited to join in on the English side.

Legend has it, whether true or not is anybody’s guess as no known hard, direct documented evidence has survived supporting this oft-told story, that a British army surgeon named Dr. Richard Shuckburg (who is known to have existed) saw the colonist recruits amble up to join the regular soldiers. Compared to the well-assembled and well-manicured English army, the colonists were a mess. Wearing “fashions that hadn’t been seen in England in a hundred years” and holding every weapon except those “familiar to the fresh, well-drilled British troops,” Dr. Shuckburg couldn’t help but laugh… and write a song. While not exactly the song we’ve come to know, the song that supposedly inspired Yankee Doodle, whether actually written by Dr. Shuckburg or not, went like this:

Brother Ephraim sold his cow
And bought him a commission
And then he went to Canada
To fight for the nation;

But when Ephraim,
he came home
He proved an arrant coward,
He wouldn’t fight the
Frenchmen there
For fear of being devoured.

The original sheet music for this noted that the song should be sung “through the nose, & in the West Country drawl & dialect.” In other words, it was meant to not only be mocking in lyrics, but tone. As for “Brother Ephraim,” this is thought to refer to Colonel Ephraim Williams of the Massachusetts militia, who ultimately was killed at the Battle of Lake George during the French and Indian War. (And if you’ve ever wondered, see: Why Colonel is Pronounced “Kernel”)

Upon completing the lyrics, purportedly Dr. Shuckburg gave it over to the Continental marching band who played “amid shouts of laughter in the English ranks.”

Whoever really wrote it, by 1768, the Boston Journal of the Times noted that the British were playing “that ‘Yankee Doodle’ song,” though the Times didn’t elaborate on what the lyrics were to this version. At this point, the song was constantly being remixed with slightly different lyrics, tunes and meanings, as was common for pretty much all popular songs at the time.

What united many of the earliest versions of this song was the not-so-subtle mocking of colonists as nothing more than moronic, unsophisticated, country yokels. For instance, after George Washington was made commander of the rebel armies, some unknown individual wrote the following lyrics,

Then Congress sent great Washington,
All clothed in power and breeches,
To meet old Britain’s warlike sons
And make some rebel speeches

Yet another version included the lines,

Yankee Doodle came to town,
For to buy a firelock, (a musket)
We will tar and feather him,
And so we will John Hancock.

A slightly more familiar version to those of us today is also one of the earlier known versions, generally credited to Harvard sophomore and American Minuteman Edward Bangs:

Father and I went down to camp,
Along with Captain Gooding,
And there we saw the men and boys
As thick as hasty pudding.

Continuing to turn the lyrics around, with the colonists variously either taking pride in the song and/or directly mocking the British, we have lyrics like

Yankee Doodle is the tune
That we all delight in;
It suits for feasts, it suits for fun,
And just as well for fightin’.

Historians aren’t completely sure when the verse about sticking “a feather in his hat and calling it macaroni” came to be. The oldest known print version of this didn’t appear until all the way in 1842, published in London in the book The Nursery Rhymes of England by James Orchard Halliwell, though this particular lyric is obviously thought to date back to the American Revolution, partially due to the term being used here, which dates it somewhat, and how mocking the use of it was.

Stepping back a little to a term related to “macaroni,” there’s an interesting side tale about the evolution of the word “doodle” to one that’s more used today – “dude.” According to esteemed etymologists Barry Popik and Gerald Cohen, “dude” was first used in the 1880s as a way to describe young New York City men who had an affinity for being flamboyantly well-dressed, well-manicured and overly pretentious – in other words, a “dandy.” (See: The King of the Dudes) Using the very words that were used to mock colonists a hundred years earlier – “doodle dandy” – people started to call these 19th century men that as well, as a means to essentially call them pretentious fools. Later, this got shortened to “doodles,” then to “doods.” Eventually, the spelling was changed to “dude.” (And if you’re curious, the original female equivalent was dudine.)

Back to the related term “macaroni”- this term pertains to the habit of rich 18th century English men going on so-called “Grand Tours.” Sort of like the more modern “gap year,” young adult men who could afford it would take long trips around Europe, learning about the culture, art and history of neighboring countries. Particularly those from “new money” would sometimes come back with more refined tastes – like an appreciation for French art, fancy exotic clothes and Italian food. These individuals’ often over the top attempts at trying to appear refined upon their return- speaking a mix of Latin and English and wearing foppish attire complete with massive “Macaroni” wigs and not one, but two pocket watches- were occasionally mocked for this. One of the nicknames they were given at this time was “macaronis.” The individuals were also considered to be part of the informal “Macaroni Club” and would refer to flamboyant fashion and the like as “very macaroni.” As for the origin of the term itself, it is presumed to originally derive from the fact that macaroni was a relatively exotic food for the British and must have been something at least some of these individuals raved about upon their return to England.

The Oxford Magazine described the so-called Macaroni Club members in 1770 as follows:

There is indeed a kind of animal, neither male nor female, a thing of the neuter gender, lately started up among us. It is called a macaroni. It talks without meaning, it smiles without pleasantry, it eats without appetite, it rides without exercise, it wenches without passion.

In other words, when the particular lyrics “stuck a feather in his cap and called it macaroni” were added to the Yankee Doodle song, the author was essentially saying that colonists were such low class, moronic fools that they thought by sticking a simple feather in their hat, they were being extremely refined and fashionable.

In the end, there were possibly even hundreds of versions of Yankee Doodle in popular  circulation during the American Revolution, some initially used by the British to mock their rebellious subjects.  In turn, the Americans embraced the song, creating countless versions of their own and other times simply taking pride in the lyrics which were supposed to be mocking.

This brings us to October 19, 1781 when General Cornwallis formally surrendered to American and French forces at Yorktown, Virginia. Legend has it that, as a way to mock the defeated troops, famed French commandeer and hero of the American Revolution Marquis de Lafayette ordered the band to play “Yankee Doodle,” with the victorious soldiers singing along.

Continuing to get its lyrics tweaked over the decades, during the Civil War, some unknown Southerner penned the following:

Yankee Doodle had a mind
To whip the Southern traitors,
Because they did not choose to live
On codfish and potatoes.

Yankee Doodle, fa, so la,
Yankee Doodle dandy,
And so to keep his courage up,
He took a drink of brandy.