March 12, 2014 Daven Hiskey
Michael asks: What’s a tarnation? Like in the expression, “What in tarnation!” 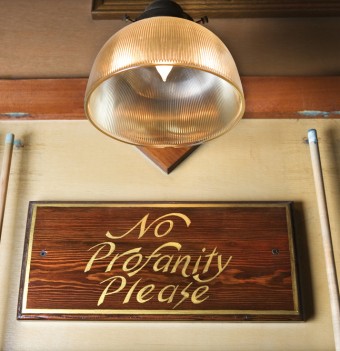 We have the word “tarnation” thanks to societal taboos against saying certain words- instead substituting in other words that often mean the exact same thing, but for some reason we find it acceptable to say the one rather than the other… Humans… 😉

In this case, the pertinent word is “damn,” or more precisely the derivative “damnation,”  which gave rise to the euphemism “darnation.”

How did the leading ‘d’ get replaced with a ‘t’?

In the 18th century in colonial America, the word “tarnal” was often used as a more acceptable alternative to “eternal,” which for a time could itself be used as a form of profanity- from the full expression “eternal God,” not unlike the modern “Jesus Christ!” when used in this sense.

To clean up the former, “eternal God” got shortened to “eternal.” The aphetic form of this, “ternal,” ultimately resulted in “tarnal.”

At some point, nobody knows exactly when, someone got the bright idea of combining the exclamation “tarnal” with “darnation,” and the result was “tarnation.”

The first documented instance of “tarnation” was in Royall Tyler’s 1790 play Contrast, where the character Jonathan uses it three times (along with the word “tarnal”):

“Why, such a tarnal cross tike you never saw! You would have counted she had lived upon crab-apples and vinegar for a fortnight. But what the rattle makes you look so tarnation glum?”

“Tarnation! That’s no laughing matter though.”

“Now the Colonel told father and brother,—you must know there are, let me see—there is Elnathan, Silas, and Barnabas, Tabitha—no, no, she’s a she—tarnation, now I have it—there’s Elnathan…”

Another interesting note is that while today “tarnation” is most closely associated with the South, and particularly cowboys, it was originally a New Englandism that ultimately spread throughout the new country.