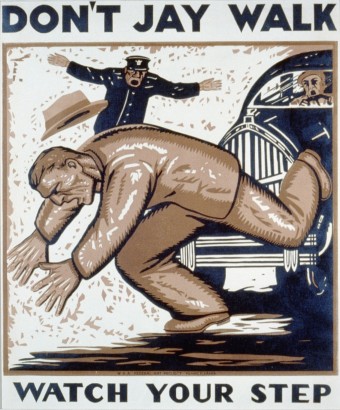 Today I found out where the word “jaywalking” came from.

For those not familiar with this term (i.e. many people outside of the United States), jaywalking is when, “A pedestrian… crosses a street without regard to traffic regulations.” (OED)  For instance, depending on where one lives, it may be against the law to cross a street where there is a crosswalk nearby, but the person chooses not to use it.  Alternatively even at a crosswalk, it is often illegal to cross if there is a “Don’t Walk” signal flashing or the like.

Contrary to popular belief, the term jaywalking does not derive from the shape of the letter “J” (referencing the path a jaywalker might travel when crossing a road).  Rather, it comes from the fact that “Jay” used to be a generic term for someone who was an idiot, dull, rube, unsophisticated, poor, or simpleton.  More precisely, it was once a common term for “country bumpkins” or “hicks”, usually seen incorrectly as inherently stupid by “city” folk.

Although the Oxford English Dictionary states that the first known use of the term “jaywalking/jaywalker” was in the June of 1917 edition of Harper’s Magazine, “The Bostonian … has reduced ‘a pedestrian who crosses streets in disregard of traffic signals’ to the compact jaywalker.”  In fact, the first actual known reference was from a 1909 Chicago Tribune where it stated, “Chauffeurs assert with some bitterness that their `joyriding’ would harm nobody if there were not so much jaywalking.”

The term was also mentioned in a 1915 New York Times article where they stated they found the term “jay walking” “highly shocking” and “truly opprobrious” (shameful). This was in reference to the way it was used at the time, akin to a racial slur, but in this case more of a pejorative “class” term.  Specifically, a derogatory term against poor people by people who were wealthy enough to drive. Automobile related companies popularly used this term in various anti-pedestrian campaigns.  For instance, John Hertz, president of Yellow Cab, even went so far as to say, “We fear the `jay walker’ worse than the anarchist, and Chicago is his native home.”  Chicago is still noted today for rampant jaywalking among the populace.

In order to counter the automobile interests who were trying to get pedestrians off the road, for a time the term “jay drivers” was used as a derogatory term for people who drive cars in such a way as to hog the road or pose a danger to pedestrians.  This obviously didn’t catch on and, in the end, the automobile companies won the fight for use of roads.

The interesting thing about the “safety” factor of crosswalks vs. jaywalking is that it isn’t entirely true. As noted in an article a few days ago, recent studies have shown that pedestrians actually are about 28% less likely to be hurt while crossing a street if they jaywalk, rather than cross at a crosswalk that doesn’t include any additional signals like traffic lights.  This is thought to be the case because people who jaywalk tend to be more careful when crossing the road than those who are crossing in crosswalks.

It’s not surprising then that in many countries in the world not named the United States, it’s often perfectly legal to cross any road except freeways (motorways) anywhere you like, regardless of whether there is a crosswalk or not.  When there are crosswalks, the onus of safety is generally put on the drivers, though pedestrians are never to dart out into a crosswalk suddenly without regard for automobiles.  When crossing in locations that don’t have a crosswalk, the burden of safety is put on the pedestrian, though in this case cars are to pay attention and slow as necessary for pedestrians. So basically, an approach that seems to be dying out in all sorts of areas of every day life, “use your brain and be considerate”.  Or, as is taught in the United Kingdom to children (The Green Cross Code), “Stop, Look, Listen, and Think” when crossing a road.  This is slightly superior to the “Stop, Look, and Listen” jingle that is sometimes taught to children here in the United States, which of course lacks the critical “Think” bit. 😉