May 20, 2014 Terynn Boulton
Warning: By necessity, this one contains profanity and vulgar references. So you may or may not want to read through it first if you normally share these articles with humans of the particularly youthful persuasion. 😉 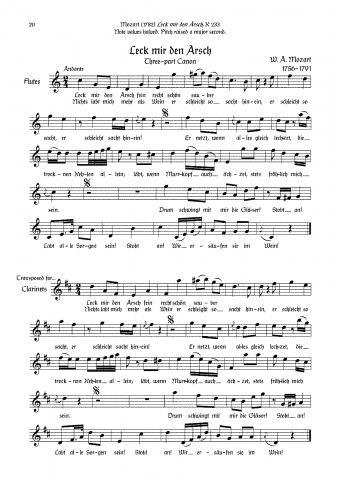 Wolfgang Amadeus Mozart is famously known for being a child prodigy and one of the greatest musical composers of all time. Eine Kleine Nachtmusik is one of the most famous of his compositions, while Leck mir den Arsch fein recht schön sauber is a much lesser known work of his (though he isn’t thought to have written the music, just the lyrics). For those who do not speak German, let me translate to English: “Lick me in the ass right well and clean,” with the “lick my ass” sentiment being somewhat equivalent to the modern English “kiss my ass/arse.”

Something they don’t typically teach you in school about Mozart is that he displayed scatological humor in many of his letters to friends and family and in a few recreational compositions. For instance, in a letter to his cousin Maria Anna Thekla Mozart, who is also thought to have been a love interest, Mozart wrote,

I have received reprieved your highly esteemed writing biting, and I have noted doted thy my uncle garfuncle, my aunt slant, and you too, are all well mell. We, too thank god, are in good fettle kettle … You write further, indeed you let it all out, you expose yourself, you let yourself be heard, you give me notice, you declare yourself, you indicate to me, you bring me the news, you announce unto me, you state in broad daylight, you demand, you desire, you wish, you want, you like, you command that I, too, should could send you my Portrait. Eh bien, I shall mail fail it for sure. Oui, by the love of my skin, I shit on your nose, so it runs down your chin…

In another letter to her, written in November of 1777, Mozart laid it on even thicker:

Well, I wish you good night
But first shit into your bed and make it burst.
Sleep soundly, my love
Into your mouth your arse you’ll shove.

He seems to have learned this one from his mother, Anna Maria, who also wrote nearly the exact same sentiment to her husband in a letter a few months before Mozart’s little poem:

Keep well, my love.
Into your mouth your arse you’ll shove.
I wish you good night, my dear,
But first shit in your bed and make it burst.

Needless to say, Mozart’s love of scatological humor was shared by others in his family.

Endocrinologist Ben Skinner estimates that 39 of Mozart’s letters include scatological passages, with the majority of them directed at his own family members – in particular his dad, Leopold, his mom Anna Maria, his sister, Maria Anna (nicknamed ‘Nennerl’), and his cousin, also named Maria Anna.

That said, he was also happy to lay it on others.  For instance, in this letter where he describes an encounter with a priest who was an

…arrogant ass and a simple-minded little wit of his profession … finally when he was a little drunk, which happened soon, he started on about music. He sang a canon, and said: ‘I have never in my life heard anything more beautiful…’ He started. I took the third voice, but I slipped in an entirely different text: ‘P[ater] E: o du schwanz, leck mich im arsch’ [“Father Emilian, oh you prick, lick me in the ass”]. Sotto voce, to my cousin. Then we laughed together for another half hour.

As noted, he shared his crude sense of humor with his friends in the form of canons, also known as rounds, where each voice and musical accompaniment enters with the same words after a delay from the previous voice and music. In Mozart’s time, canons were very popular forms of music sung amongst friends in recreational settings.

An 18th century composer by the name of Wenzel Trnka, whose compositional specialty happened to be canons, had two of his compositions misattributed to Mozart for nearly two centuries, until 1988, when Wolfgang Platz corrected history. The confusion started in 1800, when Mozart’s widow Constanze sent the works as part of a bundle of canons to the publisher Breitkopf & Härtel, who published them in 1804 as Mozart’s work.

Here is one of the transcribed versions of the lyrics of Mozart’s party song, “Lick my ass right well and clean”, set to the music of Trnka’s “Tu sei gelosa, è vero”:

“Lick my ass nicely,
lick it nice and clean,
nice and clean, lick my ass.
That’s a greasy desire,
nicely buttered,
like the licking of roast meat, my daily activity.
Three will lick more than two,
come on, just try it,
and lick, lick, lick.
Everybody lick their ass for themselves.”

That must have been quite the party!

While this seems very crude to modern sensibilities, scatological humor was quite prevalent for several centuries, particularly in Germany and nearby regions.  In fact, even famed German monk Martin Luther was known for his affinity for frequent fecal references, such as this gem, “I am ripe shit, so is the world a great wide asshole; eventually we will part.”

Luther also often mentioned warding off the devil with farts,

Almost every night when I wake up the devil is there and wants to dispute with me. I have come to this conclusion: When the argument that the Christian is without the law and above the law doesn’t help, I instantly chase him away with a fart.

Cultural anthropologist Alan Dundes even went so far as to say,

In German folklore, one finds an inordinate number of texts concerned with anality. Scheiße (shit), Dreck (dirt), Mist (manure), Arsch (ass), and other locutions are commonplace. Folksongs, folktales, proverbs, folk speech—all attest to the Germans’ longstanding special interest in this area of human activity. I am not claiming that other peoples of the world do not express a healthy concern for this area, but rather that the Germans appear to be preoccupied with such themes. It is thus not so much a matter of difference as it is of degree.

Whether that’s an accurate assessment or not, at the least, historical notables such as Mozart and Martin Luther, among several other famous individuals from the region around or in Germany, certainly did seem to love potty humor.