This Day in History: June 13th 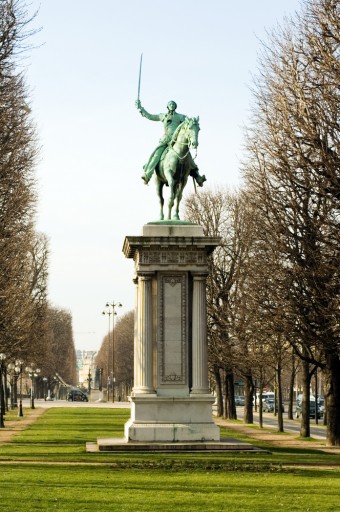 Inspired by the struggles of the American colonists to free themselves from the tyranny of English rule, a 19-year-old French aristocrat set sail from his homeland to volunteer his aid. He paid for his own ship and travel expenses since the colonists could not afford to finance his voyage, and passed the time during the 54-day sea journey learning rudimentary English phrases. The young Frenchman landed near Charlestown, South Carolina on June 13, 1777.

The Marquis de Lafayette, Marie Joseph Paul Yves Roche Gilbert du Motier, was born in Auvergne on September 6, 1757 to one of the highest ranking noble houses of France. His wife’s family was related to the King, so he married pretty well too.

When he arrived in America in June 1777, he was commissioned as a Major General in the Continental Army, but was not given a unit of his own to command. Because of this, he was considering returning to France in August. But Ben Franklin, a shrewd judge of character, talked up the Marquis to George Washington and convinced him to take the young Lafayette under his wing. Washington grew to love Lafayette as a son, and the two enjoyed an extremely close relationship until Washington’s death in 1799.

Lafayette’s first battle with the Continental Army was in Pennsylvania near the Brandywine River, where he was shot in the leg but kept fighting until all his men could make their escape. Impressed with his bravery and military prowess, Washington advised Congress to grant the young Marquis his own division of troops to command.

Philadelphia, Gloucester, New Jersey, Valley Forge, Pennsylvania … Lafayette proved himself invaluable to the American cause again and again. When tensions arose between the colonists and the French in 1778, Lafayette returned to France, greeted by much cheering, to smooth things over. While he was home, his wife gave birth to a boy named Georges Washington de Lafayette. On his return to Boston he was once again greeted with much fanfare, making him a hero of both the old world and the new.

When Lafayette returned to America, he contained the British forces of General Cornwallis in Yorktown, Maryland, until September 14, 1781 when General Washington showed up with reinforcements. A key factor in holding the British at bay was the French fleet blockading the port, preventing any British ships from coming to Cornwallis’ aid. American and allied forces laid siege to Yorktown on September 28, and on October 19, Cornwallis was forced to surrender. This victory ensured the American Revolution was all but won.

Not long after the Battle of Yorktown, Lafayette sailed home to France where he was received with the highest honor and distinction, and he served his own country with great dedication. He made several visits back to the United States, and corresponded with his “father” George Washington until he passed away. After his death, Lafayette made a point to visit his tomb. During that same visit, he became the first foreign dignitary to ever speak before the U.S. Congress.

The Marquis de Lafayette died on May 20, 1834. After a military funeral, he was laid to rest at the Cimetiere de Picpus in soil sent from Bunker Hill, with an American flag flying over his grave. When the news of Lafayette’s passing reached America, the country devoted an entire month to mourning the death of the great hero.

Lafayette is still remembered by the country he so selflessly helped win its freedom. 59 cities and counties in the United States are named in his honor, although Fayetteville, North Carolina is the only one he actually visited.

During the First World War when American troops were entering France, Colonel Charles E. Stanton said “Lafayette, we are here.” The Colonel explained it was an honor to come to the aid of France – Lafayette’s country – just as he had come to the aid of America so many years before.

In recognition of all the Marquis de Lafayette had done to aid America in its fight for independence, he was presented with honorary United States Citizenship under a Joint Resolution of Congress in 2002.