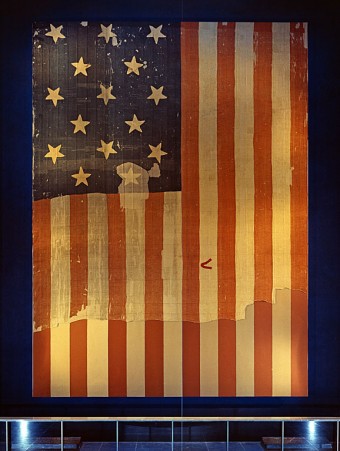 The actual flag that flew over Fort McHenry on the morning of September 14, 1814, helping to inspire the Star Spangled Banner

The melody that would be borrowed for the Star Spangled Banner was extremely popular and well known at the time the future U.S. national anthem was penned.  It is known to have been used for at least 84 popular songs in the United States alone, including Adams and Liberty – The Boston Patriotic Song and the subsequent tune Jefferson and Liberty, written after Jefferson was elected President.

The original song that used the melody was To Anacreon in Heaven, written sometime between 1760 and the late 1770s, expounding on the virtues of wine.  The song itself was first publicly published in The Vocal Magazine in 1778 in London.  The music was composed by John Stafford Smith and the lyrics are thought to have been written by Ralph Tomlinson, president of the Anacreon Society, which was a popular gentleman’s club in London whose membership were dedicated to “wit, harmony, and the god of wine”.  The society chose the famed Greek poet Anacreon as their “patron saint” as he was particularly known for composing odes to merrymaking, women, and wine- among the Anacreon Society’s favorite things.

The full lyrics to To Anacreon in Heaven are:

To Anacreon in Heav’n, where he sat in full glee,
A few Sons of Harmony sent a petition;
That he their Inspirer and Patron wou’d be;
When this answer arrived from the Jolly Old Grecian;
“Voice, Fiddle, and Flute,
No longer be mute,
I’ll lend you my name and inspire you to boot,
And besides I’ll instruct you like me, to intwine,
The Myrtle of Venus with Bacchus’s Vine.”

The news through Olympus immediately flew;
When Old Thunder pretended to give himself airs.
If these Mortals are suffered their scheme to pursue,
The Devil, a Goddess, will stay above stairs.
“Hark,” already they cry,
“In transports of joy,
Away to the Sons of Anacreon we’ll fly.
And besides I’ll instruct you like me, to intwine,
The Myrtle of Venus with Bacchus’s Vine.

The Yellow-Haired God and his nine lusty Maids,
From Helion’s banks will incontinent flee,
Idalia will boast but of tenantless Shades,
And the bi-forked hill a mere desert will be.
My Thunder no fear on’t,
Shall soon do it’s errand,
And damme I’ll swing the Ringleaders I warrant,
I’ll trim the young dogs, for thus daring to twine,
The Myrtle of Venus with Bacchus’s Vine.”

Apollo rose up and said, “Pry’thee ne’er quarrel,
Good sing of the Gods with my Vot’ries below:
Your Thunder is useless” — then showing his laurel,
Cry’d “Sic evitable fulmen” you know!
“Then over each head
My laurels I’ll spread
So my sons from your Crackers no mischief shall dread,
While snug in their clubroom, they jovially twine,
The Myrtle of Venus with Bacchus’s Vine.’

Next Momus got up with his risible Phiz
And swore with Apollo he’d cheerfully join —
‘The full tide of Harmony still shall be his,
But the Song, and the Catch, and the Laugh,
shall be mine.
Then Jove be not jealous
Of these honest fellows,”
Cry’d Jove, “We relent since the truth you now tell us;
And swear by Old Styx, that they long shall intwine,
The Myrtle of Venus with Bacchus’s Vine.”

Ye Sons of Anacreon then join hand in hand;
Preserve Unanimity, Friendship, and Love!
‘Tis yours to support what’s so happily plann’d;
You’ve the sanction of Gods, and the Fiat of Jove.
While thus we agree,
Our toast let it be:
“May our Club flourish Happy, United, and Free!
And long may the Sons of Anacreon intwine,
The Myrtle of Venus with Bacchus’s Vine.

The tune to this little ditty became wildly popular and was adapted to a variety of other lyrics, as was the practice at the time. The lyrics that ultimately became the most historic to use the tune were those written by attorney Francis Scott Key while he sat on a British ship at a distance from the Battle of Fort McHenry that took place on September 13-14, 1814 during the War of 1812.

Key was a temporary prisoner aboard a British ship, along with his companion Colonel John Stuart Skinner, as they’d been sent there to try to secure the release of a few Americans, including an American doctor being held by the British, Dr. William Beanes. During dinner with Vice Admiral Alexander Cochrane, Rear Admiral Sir George Cockburn, and Major General Robert Ross, Key and Skinner plead the case for the release of the prisoners, which they eventually got the British to do in the case of the elderly Dr. Beanes.  However, Key and Skinner were held for the duration of the battle as they’d had occasion to observe the strength and apparent strategy of the British forces.  So they were not to be released until after the battle was over, held on a ship about four miles from the battle front for their safety.

Key wrote some of the lyrics during his stay on the British prisoner ship, after seeing the “flag was still there”.  The rest he finished up at the Indian Queen Hotel when he was released in Baltimore two days after the battle.  The lyrics were first published in the Baltimore Patriot and The American newspapers on September 20, 1814 under the title Defence of Fort McHenry. It was quickly picked up by fifteen other newspapers in the United States and its popularity grew from there.

It wouldn’t be published under the name “Star Spangled Banner” until Thomas Carr started selling the lyrics and sheet music together at his music shop in Baltimore under that title. As for when it became the United States’ official national anthem, that occurred on March 3, 1931 when President Herbert Hoover signed a Congressional resolution into law to this effect.  Before this happened, Hail, Columbia (“Columbia” being an alternate name for America particularly common in the 18th century) and My Country, ‘Tis of Thee were often more popularly used in that role.

O say can you see by the dawn’s early light,
What so proudly we hailed at the twilight’s last gleaming,
Whose broad stripes and bright stars through the perilous fight,
O’er the ramparts we watched, were so gallantly streaming?
And the rockets’ red glare, the bombs bursting in air,
Gave proof through the night that our flag was still there;
O say does that star-spangled banner yet wave,
O’er the land of the free and the home of the brave?

On the shore dimly seen through the mists of the deep,
Where the foe’s haughty host in dread silence reposes,
What is that which the breeze, o’er the towering steep,
As it fitfully blows, half conceals, half discloses?
Now it catches the gleam of the morning’s first beam,
In full glory reflected now shines in the stream:
‘Tis the star-spangled banner, O! long may it wave
O’er the land of the free and the home of the brave.

And where is that band who so vauntingly swore
That the havoc of war and the battle’s confusion,
A home and a country, should leave us no more?
Their blood has washed out their foul footsteps’ pollution.
No refuge could save the hireling and slave
From the terror of flight, or the gloom of the grave:
And the star-spangled banner in triumph doth wave,
O’er the land of the free and the home of the brave.

O thus be it ever, when freemen shall stand
Between their loved home and the war’s desolation.
Blest with vict’ry and peace, may the Heav’n rescued land
Praise the Power that hath made and preserved us a nation!
Then conquer we must, when our cause it is just,
And this be our motto: “In God is our trust.”
And the star-spangled banner in triumph shall wave
O’er the land of the free and the home of the brave!