Why are People so Much Taller Today than Historically?

May 16, 2016 Melissa
Tilla asks: Why is it that people are much taller now than even a few decades ago? 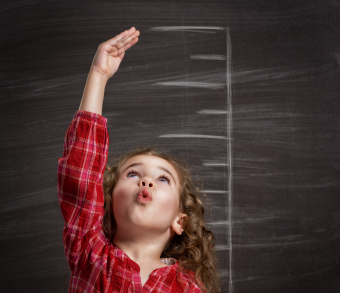 Over the last century and a half or so, humans, as a group, have grown significantly taller, with men from western, industrialized countries today being on average between 3 and 7 inches (7-18 cm) taller than their counterparts in the mid-19th century. So why have humans gotten taller?

There is very strong evidence that this simply comes down to nutrition and the body’s ability to fully benefit from said nutrition via not getting certain diseases that hinder the absorption of consumed nutrients. That the environment is drastically more important than other factors, such as microevolution, is strongly indicated via looking at human height during times of relative comfort compared with times of strife.

For example, examination of skeletons over human history has shown that, while there have been peaks and valleys of average height across different cultures at different times, from the Stone Age through the beginning of the 19th century there has been little significant difference in average human height on the whole.

As for the peaks and valleys, during the Black Death (1346-1353), 60% of the European population, about 50 million people, died quite suddenly, leaving the surviving 40% and their offspring with greater access to food and less crowded living conditions; together, this contributed to fewer diseases and better nutrition, and as a result, people during the 15th and 16th centuries in Europe grew rather tall. In fact, in England, the average man was only about 1.5 inches (3.81 cm) shorter during this time compared with the average Englishman today (at about 5’9″ or 175 cm).

Seventeenth century Europe, however, was a mess, with cold winters from the Little Ice Age limiting crop production, civil war in England, Louis XIV’s expansionary aggression and the Thirty Years’ War. As a result, human health and height suffered, with the average Frenchman reaching only about 5’4″ (162 cm). (Not coincidentally why French men popularized wearing high-heels around this time, a practice that women would later adopt and men largely abandon, outside of horse riding boots.)

Faring little better during the 18th and early parts of the 19th century, many western Europeans lived in dirty, disease-ridden slums that prevented them from increasing significantly in height, with men across Europe in 1850 only reaching, on average, about 5’5″  (165 cm). Starkly marking the difference proper diet and living conditions can make here is that 19th century English students at the Sandhurst Military Academy (upper class) were on average a whopping 8.7 inches (22 cm) taller than their compatriots at the Marine Society boys (lower class).

In the United States, things were quite different, with the average man in 1850 attaining a height of about 5’7″ (170 cm). In fact, on average, people in the U.S. remained taller than their European counterparts from the Revolutionary War through World War II (with a slight dip during the second industrial revolution). It is thought that American height dominance during this period was due to having a relatively resource-rich environment, where, with the largely privately owned agriculture-based society, many had easier access to a wider variety of nutrition sources than was common in places like the UK, where a very small percentage of people owned much of the land being farmed and much higher population densities existed. (See: Why the Mass Avoidance of Some Business is Called Boycotting) 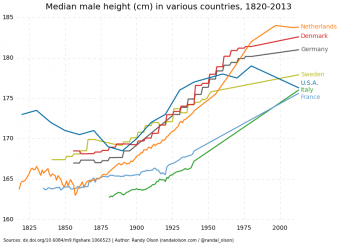 Things began to change after WWII. In the last half century or so, the average American height has more or less remained the same, while post-war Europeans have, on the whole, sprouted like crazy. In the most extreme case, throughout the 19th century men and women of the Netherlands averaged roughly 5’5″ (166 cm) for men and 5’1″ (156 cm) for women- relatively short for their era and region of the world. Today, the tallest people in the world are found in the Netherlands, where the average man is just over 6 feet tall (183 cm) and the average woman is nearly 5’7″ (170 cm). By comparison, American men are 5’9″ (175 cm) on average, and women are 5’4″ (163 cm).

Some believe that the great strides in height made by Western Europeans over Americans can be attributed to their universal health coverage and other social policies, such as maternity services and greater parental leave allowing for better practicality of things like breastfeeding vs. formula fed and, later, more time off work providing extra time for preparing nutritious meals, rather than relying on fast-food and other quick high-calorie, low nutrition “junk” foods. Further, the so-called “over-nutrition” prevalent in the U.S., combined with lack of physical activity leading to widespread obesity, has also been noted for its negative effects on growth hormones and metabolism, limiting the ultimate adult height somewhat.

So how high will humans grow with perfect nutrition and health care? It’s generally thought the Dutch are close to the peak of average human height potential, at least based on innate genetics, and Americans and others are close to it. This is probably a good thing as the human body is not adapted well for extreme height, and those outliers who do tower over the rest of us often suffer from various pains and other debilities related to their abnormal height as they age.