High Heels Were Popular Among Men Before Women 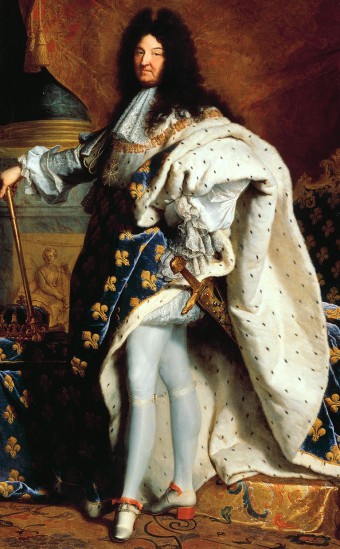 The first high heel wearers are believed to have been Persian horseback warriors sometime around the ninth century. The extended heel was reportedly developed specifically for riding, to keep the rider’s foot from slipping out of the stirrups. It also helped to hold the rider steady when standing up in the stirrups and shooting arrows.

A group of Persian diplomats visited Europe in 1599 to recruit allies to help Persia defeat the Ottoman Empire. A craze for Persian culture developed as a result and Persian-style high heeled shoes were adopted enthusiastically by Western European aristocrats.

The shoes became a status symbol and the heels were extended to make the men look even taller. (This is thought by many etymologists to be where the term “well heeled”, meaning “wealthy” originally came from.)

Just as the 1980s had notorious shoe collector Imelda Marcos, the 1600s had a rabid shoe collector and trend setter in Louis XIV of France. While he was a powerful leader, his height left something to be desired at five feet, four inches tall (1.62 m), which was slightly below average in his day. (The average height for men in France at the time, in modern international units, was 5 ft. 5 inches or 1.65 m.  Note: Contrary to popular belief, Napoleon was not short; he was two inches taller than the average in his day.)

A king being slightly shorter than average wasn’t ideal for his ego, so Louis took measures to make himself look taller, sporting four inch heels, often decorated with elaborate battle scenes. Eventually, he switched to having red heels on all his shoes and decreed that only the upper echelons of society could have matching red heels. It became a simple matter of looking at the color of a man’s heels to see if he was in the king’s inner circle.

Not to be outdone, women of the 1600s started wearing heels as a way of showing their equality. Elizabeth Semmelhack, curator of the Bata Shoe Museum in Toronto and author of Heights of Fashion, a History of the Elevated Shoe, says the rage of that period in parts of Europe was for women to dress and act like a man. (It should be noted, though, that at the time men’s outfits by today’s standards were extremely effeminate, a-la King Louis XIV’s photo above.)

You had women cutting their hair, adding epaulettes to their outfits. They would smoke pipes, they would wear hats that were very masculine. And this is why women adopted the heel — it was in an effort to masculinise their outfits.

As usually happens, high fashion is adapted into more affordable versions and filters down to the less fortunate.  The lower classes started to wear high heels. The elite responded by making their heels increasingly higher to maintain the distinction of being upper class- the higher the heel, the more expensive the shoe typically was. They also began to differentiate heels into two kinds- fat heels for men and skinny for women.

Eventually, men got away from the heel almost completely to show their distinction from women. Since the late 18th century, men’s shoes have had primarily low heels, except for cowboy boots and some shoes worn by rock stars, who occasionally have a propensity to wear effeminate garb similar to before the “Great Male Renunciation”, when men switched from wearing jewelry and elaborate outfits with highly decorated cloth to drab, darker colored simple clothing. Basically, when Western men on the whole stopped trying to beautify themselves, starting at the tail end of the 18th century.

For a time, women also drifted away from the heel as it truly wasn’t practical, particularly on old muddy or cobblestone style streets where heels were nearly impossible to walk in. They weren’t gone long, though. The heel came back into fashion in the mid-19th century with the advent of photography.  Why? As seems to happen often when new technologies are introduced, pornographers are always among the first to take advantage and they were among the first to embrace photography. This pertains to high heels in that they often dressed models for risqué post cards and other photographs in nothing but a “modern” (for that time) version of the high heel.