August 19, 2014 Karl Smallwood
Glossyhorses asks: Why can’t you have your fences over 6 feet tall in the backyard and half that in the front? 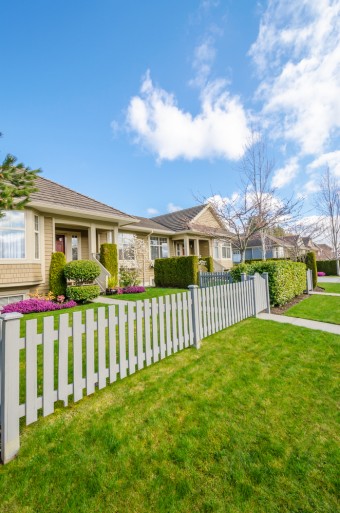 The primarily purposes of a fence include to keep animals in, people out,  and perhaps even so others can’t see into your yard. But if this is the case, why are there laws that limit how tall fences can be? Also, what would happen if you ignored the law and built a monstrous fence anyway, or planted a row of tall trees around your property instead to try to get around the fence height restrictions?

Contrary to what you’d expect from such an innocuous object as a fence built on your own property, the laws surrounding the building and regulation of fences are hugely complex. As noted by the Lectric Law Library, fence ordinances in suburban and urban areas can be remarkably robust and are often bewilderingly complicated and austere. Also, since the majority of fence laws are handled on a local level, some of what we’re about to say may not specifically apply to the area in which you live.

All that said, although the rules surrounding the building of a fence are very strict, they’re notoriously difficult to enforce. For example, let’s say that the fence laws in your area state that no fence can exceed 6 feet in height, which is fairly common in many regions. If you went ahead and built a fence that was 7 feet tall, it’s generally only going to be an issue if someone complains. And even then, there’s no guarantee anything will come of that complaint, particularly if your neighbors wait awhile before complaining or the structure was there before a new neighbor who then decides to complain moved in.

This is because local authorities are usually unwilling to weigh in on very minor infractions of such laws because the cost of doing so outweighs the potential benefits. So, if nobody complains and the fence is of otherwise sturdy construction, it’s highly unlikely you’re going to be forced to tear it down. This is in part due to a legal principle known as “substantial compliance“, which is defined as follows:

In regards to fence laws, this basically means that as long as a fence you build is mostly compliant with the local laws of your area, you can argue yourself some wiggle room if it’s not exactly the correct height.

But why is there a limit on how high fences can be anyway? Well, broadly speaking this is mostly for the benefit of other people. While a 30 foot high fence may not bother the person who built it, it could very easily impact the day-to-day life of his neighbour by blocking light, air flow, or view to their home, among other things. As mentioned, an accepted (but by no means universal) rule of thumb is that a back yard fence should be no more than 6 feet tall.

Of course, there are exceptions, for example if your back yard borders a busy road, you can apply for a one-time permission from your local authority to build a much taller fence to block out noise and view of the cars and trucks driving by. Of course, if there is an intersection near where you’re building that fence or if the road is curvy, so your fence might block the view of drivers around a corner, then you’ll probably be denied.  This brings us to front fences.

In this case, a commonly accepted but not universal idea is that they should be shorter than a back yard fence, often limited to between 3-4 feet in height. Why? Well it may be your first instinct to assume that this is something to do with maintaining the aesthetics of a given neighbourhood. But no, as alluded to a few sentences ago, the main reason front fences are invariably required to be shorter is because roads tend to border them and taller fences can obscure the vision of drivers. For instance, a driver in this case may not be able to see kids playing in the road right around a bend. And, of course, with fences around houses that happen to be on corner lots, an overly tall fence could potentially turn an intersection into a collection of deadly blind corners.

So what about natural fences like trees and bushes? Well, for the most part they’re treated the same way fences are. Although, in some cases border trees or shrubs are allowed to be slightly taller than fences. But, in general, they’re held to approximately the same standards as a man-made fence, so no loophole in the law here. If your trees or shrubs impact your neighbour’s enjoyment of his or her property, said individual may be able to legally compel you to trim or even remove them. On the flip-side, as with fences, if you plant a giant row of trees or bushes and nobody complains for a good amount of time and your plants don’t obscure traffic, you’ll probably be allowed to keep them even if someone many years later complains, unless something significant has changed about the tree or bush in the interim.

In the end, while there are numerous laws surrounding this topic, it almost always comes down to how nice or laid back your neighbours are and whether your fence or shrub is causing any traffic safety problems.

Weirdly, the one thing the law really can’t dictate is what your fence looks like, to quote FindLaw: “In most cases, except in a very few communities, the appearance, style, or design of a fence is unregulated by local law.”

Which means that although your neighbour can complain about you building an 8 foot tall fence, there’s generally nothing they can do to stop you building a 6 foot tall one and covering it in pictures of Justin Bieber. The only exception is if your new fence violates a blight ordinance, which varys from state to state, or if it’s constructed maliciously for the express purpose of annoying your neighbour, in which case it can be legally defined as a spite fence. (Yes, that’s a thing.)

In regards to spite fences, they’re defined as “A fence built not to any beneficial purpose but, rather, to annoy a neighbour.” Perhaps the most famous spite fence of all was the one built by Charles Crocker in the late 19th century. Crocker wanted to purchase a small San Francisco property from one Nicholas Yung, but Yung refused to sell unless Crocker doubled his offer. Crocker, instead, responded by building a massive 40 foot tall wall around his property. The two men took their dispute to the grave and the wall only came down when their heirs settled their differences. Today, such constructions are illegal, thanks in part to cases like the one between Crocker and Yung.