The Fascinating Ways in Which Breakfast Cereals are Made 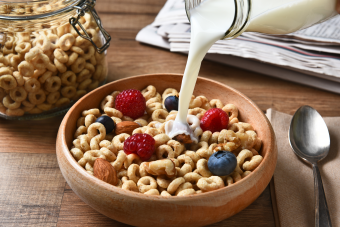 Americans eat nearly three billion boxes of cereal every year. And yet few of us know how Rice Krispies, Corn Pops, or any other cereal is made. Here’s a look at the science behind some of our favorite breakfast foods.

Popcorn for breakfast? It’s not the first thing most people think of eating in the morning, and it’s not marketed as a breakfast food. But popcorn does have many of the qualities that cereal manufacturers look for in a breakfast food: It’s light and airy, it’s crispy, and it crunches when you eat it. If you put some popcorn in a bowl and poured milk over it, it would probably stay crunchy at least as long as your favorite breakfast cereal does.

But what about foods that don’t pop naturally the way that popcorn does? Quite a bit of the technology used in the manufacture of breakfast cereals is employed specifically to make those foods “poppable”—to produce desirable, popcorn-like qualities in foods that don’t normally have them- foods like whole-grain rice and wheat, for example. Or grains that have been milled into flour, then mixed with other ingredients to make dough that is then baked into individual pieces of cereal.

To understand how whole grains and dough end up as Puffed Wheat, Cheerios, and Kix, it helps to understand what makes popcorn pop in the first place.

Wheat and rice don’t have external shells that trap steam the way that corn does, so if you want to obtain popcornlike results with these grains, you have to provide the pressure cooker. When cereal companies want to make puffed wheat, puffed rice, or puffed dough, they do just that, using a process known as “gun puffing” developed by Quaker Oats researchers at the turn of the 20th century. Why is it called gun puffing? Because the process was perfected using an actual Army cannon—one that saw action in the Spanish American War—that was converted into a pressure cooker. (Corn kernels can also be gun puffed. That’s how Kellogg’s Corn Pops are made.)

“Extruded” Gun-Puffed Cereals Made From Dough

How do they make Kix, Trix, Cheerios, Alpha Bits, Cocoa Puffs, and other “extruded gun-puffed” cereals?

If you’ve ever watched cookies bake in the oven, you know that the dough puffs as it cooks. Rice Krispies are made the same way, in a process that’s called “oven-puffing.”

Looking into a bowl of Corn Flakes or Raisin Bran, it’s easy to imagine that all those flakes started out as one single sheet of cereal that was crumbled into a thousand individual flakes. But that’s not how they’re made.